What year is this?

Looking at all my 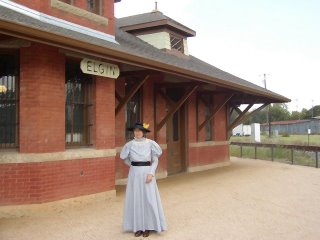 pictures in Picassa this morning—I finally replaced a bad video card and can see pictures again—I noted these from...would you believe 1903? This depot, in Elgin, TX, was indeed built in 1903, but the pictures come from 2003 when the Depot, now a museum, celebrated its centerary. The woman is my sister—we stayed up all night making the dress with mouton chop sleeves.

There were large numbers of people dressed for the occasion. I turned some pictures into paintings—makes it easier to believe it's 1903 if you don't see the details. 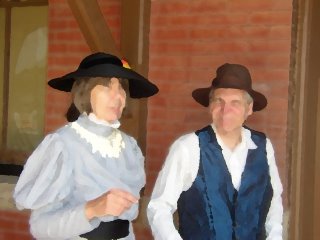 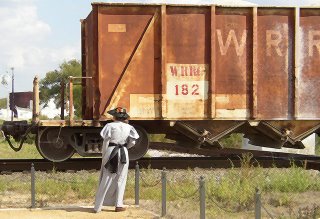 I love railroad car picture (I cropped the pictures so you can't see the modern shoes). Railroad cars just haven't changed. The names of the railroads may have changed and if you look closely you might see that this car was built in 1990, but it could be 1903. 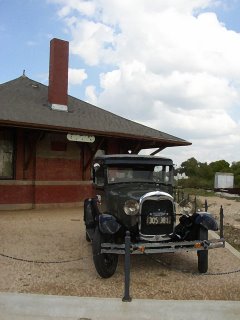 There was an exhibition of old cars in the parking lot the day of the celebration. Those cars break the illusion of 1903, of course, but still look pretty authentic parked by the old depot as they would have been when folks picked up visiting relatives at the depot.

Check out my sister's blog on the Elgin Depot Museum: http://elgindepotdustpan.blogspot.com/ 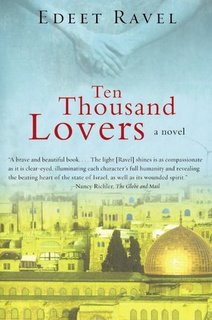 I just finished the book last night. Reading it, I kept thinking—as I'm sure the author intended—about the debate and horror in the US at torture and abuse at Abu Gharib, at rendition, a "torture memos" and all that stuff.

It's a well put together book and the suspense works. There are two time periods—a present where the main character, Lily, a Canadian who was actually born on an Israeli kibbutz, is living in London. Her daughter is grown and visits with her boyfriend. The reader soon learns that Lily is writing, not her usual academic book, but one about her own experience in Israel as a student in the 70ies. In that other "present"—where the book begins and ends—Lily meets her lover while hitchhiking. He’s handsome and caring and she falls for him (as he does for her) completely. The problem is he’s an interrogator who works for the army and sometimes for the security services, interrogating Palestinian prisoners. Lily is turned off by the violence implied in his job. She soon learns that he is as turned off as she and accomplishes his “miracles”—for his bosses find him more effective than anyone else—without violence. But he hates the army and the growing violence—even torture—that is not only condoned but encouraged. He senses that the oppressed have become the opressors.

The suspense comes because of the mature Lily writing in her London flat—obviously living alone, telling her story. The lover, Ami, is no longer in the picture and the reader reads on to learn what happened to him and to their relationship. There’s a third element in the narration and that is the discussion of the Hebrew language and how it has become adapted from the language of the Bible to modern life. These sections are very well done, interesting, not too long and always connected thematically to the action of the novel.

I wonder if this book is popular in Israel? I had to refresh my memory about Israeli history since the '67 war which I watched on TV (Vietnam was NOT the first televised war). I wasn’t sure about the “territories”, but learned that the West Bank and Gaza were the areas won in that war and not, like Sinai, given back. I’ve never been to Israel, but my sister had several times and she gave me a quick history refresher. Besides she had also lived in Egypt and a bit in Syria and Jordan too, so had the Middle East perspective.

It really never dawned on me before to think about Israel's desire to have a "Jewish majority" or to consider how unrealistic that is. Or to consider the difference in the positions of the Palestinians who stayed as Israeli citizens and those who left and lived in camps. My sister said her impression was that though ethnically Jewish most Israelis were more like Europeans than Americans in terms of their religious practices—pretty secular. Sort of like the reaction of Lily and Ami to the fact that the only way to get married was in a religious ceremony. My sister also said that many of the Russian immigrants to Israel in the last 30 years or so have also been ethnically Jewish but not "religious" or even familiar with religious observances. Issues the novel touches upon are the difference between a Jewish state and a democratic one and the difficulty of marrying the two concepts.

I enjoyed the novel and didn't figure out the title till the end (unfortunately had I not been told otherwise I’d have assumed it was a romance novel). But I can’t explain the title without giving away the plot….

At Risk by Stella Rimington

I’ve been on a spy kick lately, rereading books by old favorites John Le Carré and Charles McCarry and watching the British TV series, Sandbaggers, which, it turns out, has a sort of cult following among intelligence buffs—supposed to be pretty authentic. Most of those books I’ve been rereading as well as Sandbaggers focus on Cold War espionage. This novel focuses on contemporary terrorism and its author, Stella Rimington, is a past director of Britain’s MI5.

It’s like a police procedural, where the good guys are chasing some baddies whom they can’t identify and know very little about. Each chapter presents bits and pieces of the story, not only from the authorities’ point of view but from that of the bad guys and of others tangentially involved in the action.

The heroine, LizCarlyle, is an MI5 officer on a counterintelligence taskforce that includes Special Branch and MI6 as well as local police. MI6 has reported the name of a possibly dangerous terrorist who’s disappeared from his job near Peshawar, Pakhistan, and is known to have obtained an illegal British driving license. The plot is complicated throughout by a Special Branch officer who may be in the pay of a gang of organized crime, known to be smuggling cigarettes and drugs and possibly to have moved into the people smuggling trade, and by the rivalry and one-upmanship between MI5 and MI6.

The action takes place mostly on the Norfolk coast where an illegal agent is believed to have arrived in Britain with a load of illegals and where a local man is found murdered in strange circumstances by a military weapon. Then the hunt is on for the person—a woman they soon discover—who meets the illegal and travels with him on his mission.

It’s not a bad thriller. Certainly the details of the chase are detailed and believable. The characters, both good and bad, are interesting and the pace of the novel works. There’s a love affair that nags in the background—possibly because that sort of thing is demanded these days—but it’s pretty feeble and the heroine decides quite early to walk out of it because her heart is really in her job. It’s so unimportant that it’s not even tied up in the end. The possibly dirty officer part of the plot is not followed up either. The odd behavior of MI6 part of the plot is tied up in the end.

The Assassins' Gate by George Packer

In contrast to most news articles, this book is not especially partisan and certainly not ranting. Though it was very critical of the conduct of the war in Iraq, Packer, a reporter for the New Yorker, was at pains to describe what happened and explain why it was such as disaster. As Christopher Hitchens, in his review of the book, said, “His book rests on three main pillars: analysis of the intellectual origins of the Iraq war, summary of the political argument that preceded and then led to it, and firsthand description of the consequences on the ground.”

I was particularly interested in the intellectual origins in the neo-conservative ideas for changing America’s foreign policy from Kissinger’s “realpolitik” to something more moral, (or, in very simplistic terms—mine not theirs—not supporting nasty dictators who happened temporarily to support American interests but supporting the growth of freedom and democracy for people around the world. Packer was certainly not unsympathetic with this view, but he thought it took a dangerous wrong turn under the control of planners who basically refused to be put in touch with reality....

The war policy was primarily crafted by two men who were not idea men (Cheney and Rumsfeld) and one who was (Wolfowitz, who was a student of the late Allan Bloom—remember The Closing of the American Mind? —and even appeared briefly as a character in Saul Bellow’s novel about Bloom, Ravelstein). One of the contemporary ideas that the neoconservatives hated was “nation building”. UN peacekeeping was seen as having caused nothing but problems and the crafters of the Iraq strategy were utterly determined that the US should not involve itself in building nations. There were relatively simplistic plans for the occupation of Iraq, not because the war came up in such a rush there was no time to plan, but because Rumsfeld deliberately excluded it. He thought that postwar reconstruction in the 90ies fostered dependency. The “plan” really was to win the battle, clean up a few things and retire immediately.

Packer went to Iraq himself to see what was going on. He traveled back and forth from 2003 to 2005, visiting all parts of Iraq and all sorts of people: Americans in all capacities, Iraqis who were Shite, Sunni, Kurd, Christian; men, women and children, Iraqi émigrés who’d returned, those who wanted an Islamic republic and those who wanted a secular state, etc. The book is full of their stories, particularly that of Kanan Makiya whose books, Republic of Fear in 1989 (about Iraq under Saddam) and Cruelty and Silence in 1993 (about the betrayal of Iraqis after the Gulf War) influenced Packer. Packer actually knew Makiya in Cambridge before the war, had coffee and talked with him frequently but came to realize in Iraq how unrealistic Makiya's ideas and plans were. The book actually ends where it began, with the two chatting over coffee in the US and the last word is Makiya’s: “I think it was Ahmad [Chalabi] who said of me that I embody the triumph of hope over experience”.

But there are other very moving stories, often of people that Packer visited with several times over a couple of years: a young woman who spent all her time figuring out how to get out of Iraq once that possibility arose, a Kurdish woman who’d been forcibly removed from her house when Saddam attempted the “Arabization” of Kirkuk, an Iraqi psychiatrist who longed to treat people’s minds but become a trauma doctor because of first the war and then the insurgency, an American father whose soldier son was killed—and many more.

The book is thoughtful and sane, designed to make readers understand the complexity.

If you’re interested in the title, here’s the first paragraph of the prologue (as well as a sample of Packer’s lovely prose): “In the shade of a high sandstone arch, a Bradley Fighting Vehicle and a platoon of American soldiers from the First Armored Division guarded the main point of entry to the vast and heavily fortified Green Zone along the west bank of the Tigris River, where the Coalition Provisional Authority governed occupied Iraq. When I arrived in Baghdad in the summer of 2003 and first saw the arch, I mistook it for one of the city’s antique gates, built during the time of the caliphs to keep out Persian invaders. The American soldiers referred to it by a name that seemed to have come straight out of the Thousand and One Nights. They called it the Assassins’ Gate.” The gate turned out to have been built by Saddam in an antique style and it was called, Bab al-Qasr, the Palace Gate.