The Complete Stories of Truman Capote

I had not read much of Capote even though he’s really been a “household name” for quite a long time. I’ve not even read In Cold Blood—so this book was a huge, but pleasant surprise for me. What a delightful writer!

The stories date from 1945 to 1982 and seem to have two settings: the halls of the rich (and those who realize they are not rich) in (which remind me a bit of Fitzgerald) and the rural, sort-of-Gothic South (which remind me of Carson McCullers). But no one can accuse Capote of retilling the soil of other writers. There's an empathy for the not rich that he didn't get from Fitzgerald and a tight control of strong emotion in his southern stories that is unlike any other Southern Gothic writer.

My favorites were the three holiday stories narrated by Buddy, undoubtedly a Capote alter ego, and focusing on his best friends, the 60-ish cousin, Sook, who, it’s implied, is a bit “simple” and Queenie, the dog. The depth of feeling which Capote finds in these stories is completely without sentimentality. The writing is clear as a bell, never strains for effect, and the feelings shine through loud and clear. Here’s a sample from the first story, “A Christmas Memory”:

When it comes time for making each other’s gifts, my friend and I separate to work secretly. I would like to buy her a pear-handled knife, a radio, a whole pound of chocolate-covered cherries (we tasted some once, and she always swears: “I could live on them, Buddy, Lord yes I could—and that’s not taking His name in vain”). Instead, I am building her a kite. She would like to give me a bicycle (she’s said so on several occasions: “If only I could, Buddy. It’s bad enough in life to do without something you want; but confound it, what gets my goat is not being able to give somebody something you want them to have. Only one of these days I will Buddy. Locate you a bike. Don’t ask how. Steal it, maybe”). Instead, I’m fairly certain that she is building me a kite—the same as last year, and the year before: the year before that we exchanged slingshots.

In the last story, Buddy visits his father in ; Sook encourages him to consider the possibility of snow at Christmas in compensation for missing out on their private holiday rituals. There’s no snow and it’s not an entirely successful visit, but Buddy writes him a thank you note on a penny postcard and years later, after his father’s death, he finds the card in his father’s safety deposit box.

I saw the film of Breakfast at Tiffany’s not long ago and realized I’d never read Capote’s story. You can be sure I’ll be reading more of him soon.

Now, can you tell me why they changed the picture of Capote from this one that appears on the hardback version of the book? (A friend says he looks like James Dean.)

Don't Let's Go to the Dogs Tonight by Alexandra Fuller 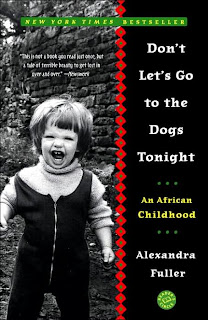 Years ago I read Mukiwa by Peter Godwin, about growing up in Rhodesia as it became Zimbabwe and expected something similar from this book. But Alexandra Fuller’s book is nothing like Godwin’s in that while he writes a sensitive, fair-minded memoir of a white family who wanted to support the country even after majority rule, Fuller’s book recreates a Rhodesian childhood, maybe a decade later, in starker terms. She writes exactly what she experienced, warts and all, without even a nod in retrospect to “political correctness”. Alexandra, or “bo” as she was called as a child (after the baboons), was actually born in England, between her parents’ sojourns in Africa, moving to Rhodesia when she was a toddler and growing up a patriotic white Rhodesian, through wars and insurgencies when white Rhodesians were fighting for their lives and their land and school children learned how to react to terrorists in order to survive as well as how to deal with gunshot wounds and indeed how to fire guns. When the war was lost, the family farm was sold off to Africans and they moved, first further south in , then to and finally to .

Life was always hard. Electricity was spotty and both excessive rain and drought were problems. Her mother was often drunk and depressed—and then manic (in later life she was diagnosed as manic depressive). Three children died, one in a drowning accident when the children were staying with a neighbor and Fuller felt responsible. Fuller and her older sister Vanessa survived despite malaria and dehydration to say nothing of various disease-carrying insects, spiders, scorpions, and the monitor lizards which could be 6 feet long. Her mother once shot a spitting cobra in the kitchen with an Uzi on automatic. There were always lots of dogs, usually horses (her mother was a superb horsewoman), and various other “pets” including a wounded owl who had to be fed dead rats and mice purchased from the African children on the farm.

The writing is stark and immediate, unmediated by later understanding. The weather. The wild life. The African employees who were not always loyal. The dictators. The poverty and waste and violence and injustice. Her love for shines through it all, even as part of you is thinking what a horror of a life for a child.

The Tears of Autumn by Charles McCarry 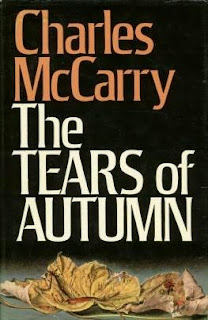 I really don’t think I read this one when it came out (in 1974). The novel’s hero, Paul Christopher, is the same one as in The Miernik Dossier. In this book he’s a agent living in and meeting his case officer in . While in the in November of 1963, he hears about the Kennedy assassination from a Belgian priest at the airport in Léopoldville (later ). Coincidentally an agent of his gives him intriguing information that causes him to try to connect the Kennedy assassination with the deaths of Diem and Nhu in what he supposed (though it was not generally known at the time) was an American-sponsored coup in . Christopher is convinced that he has enough contacts to prove that the instigators of the assassination were in . His superiors in the government, though, find his theory preposterous and refuse to sanction his operation. Christopher quits “the outfit” [CIA] and works on his own, though he gets unofficial help from former colleagues. Traveling to Africa, Asia, North American and , Christopher tracks down the plotters and convinces them (by logic or force) to give him the proof. He deals with an American gangster in , the head of the Ngo family (to which Diem and Nhu belonged) and his daughter, a North Vietnamese agent, a defecting Russian agent, a Cuban freedom fighter in the and others. He convinces those who help him to keep key people alive (when the collaborators would prefer otherwise) so that proof can be verified later. The Vietnamese family, who want the out of , cooperates, when it does, because Christopher tells them the American people would be so horrified at the truth that they’d never authorize another cent being spent to help . There’s a side issue when Christopher finds the Vietnamese family consolidating heroine production which he interprets as a strategy to hook the millions of American service men who seem destined to arrive soon. (Remember, in 1963, the Vietnam war was not full blown and the American presence was primarily relatively small numbers of military advisors.)

The details of the plot are fascinating and, I must say, believable. When Christopher presents his case to representatives of the Johnson administration, however, it’s canned and the evidence destroyed. They don’t want the president to know and either stop the military intervention or feel conflicted about not doing so because of what he knows.

The Miernik Dossier by Charles McCarry 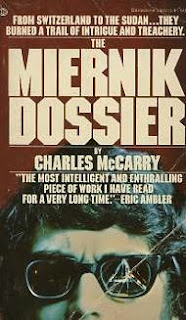 When I recently read Charles McCarry’s The Old ys, about over-the-hill-spies conducting an operation, I remembered McCarry’s spy thrillers from the 70ies and 80ies, and I remembered the four of them I bought to reread in my old age. I’m not even sure I read all of them before. I didn't remember this one.

It's organized as a “dossier” which includes all the statements of the principals and the reports of the various intelligence agencies on a project where agents from various intelligence services accompany a mutual friend, the son of an Amir in the Darfur region of Sudan (they were having trouble with bandits then too), from Geneva to deliver the gift of a Cadillac to the Amir. The group usually meets for lunch in where all are based and evidently know but don’t talk about their occupations. There’s Paul Christopher, an American agent; Nigel Collins, a British agent; Ilona Bentley, a British citizen and Bergen Belsen survivor who is actually a Russian agent, and, along with Kalash, the Sudanese Amir’s son, there is Miernik, a Pole who works for the United Nations. He’s interested in , has studied its history and is writing a book about it. He speaks Arabic. No one knows for sure, though, whether he too is an agent.

The four men set out in the Cadillac. Bentley, who is Collins’ lover but has also had a fling with Miernik, flies and joins them in . The Americans are conducting an operation where they hope to install the Amir’s son, Kalash, an grad and thoroughly Europeanized African, as the head of a rebel group called ALF to prevent it from being used by the Russians. Each of the travelers knows of the operation and writes a diary or reports to superiors, but they don’t talk to each other about their intelligence roles. And they don’t share information relative to intelligence matters or to the ALF operation. A further complication is that Miernick talks the American into going into (where of course Americans were not welcome during the cold war) to bring out his sister, in an operation planned by an old friend who’s a known KGB agent.

All go back and forth (privately) on Miernik. Is he a Polish (or Russian) agent or just the bumbling academic he seems to be? Is his sister really his sister?—he is big, dark, hairy and homely; she is blond, small and beautiful. He says she's a student at but research shows no such person enrolled. The sister joins the group which is now 4 men and 2 women and they drive the Cadillac down the and into where the desert gets more dangerous and the roads eventually stop.

The conclusion presents a moral dilemma for the American, Paul Christopher, who is the main character, when he thinks he made the wrong decision and tries to convince his superiors.