House of Meetings by Martin Amis 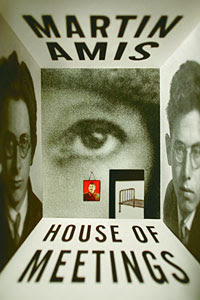 I’ve never read Amis before and this on was a powerful small package of words. It’s narrated by an elderly Russian who fought in WWII, raping his way with the rest of the Russian army across Germany and into Berlin, was sent to the gulag for admiring America (actually he was admiring a woman whom he said had the curves like the map of the Americas), was set free (though he had to buy a certificate of manumission) and made a fortune in Moscow before emigrating to Chicago and becoming a wealthy international arms dealer. The story is told in a letter—or series of letters—he wrote to his black step-daughter, Venus, in .

The focus is his relationship with his younger half brother Lev, who at 19, turns up at the same camp in with the news that he has married the narrator’s love, the mysterious, Jewish, sexy Zoya. The title refers to the House of Meetings, where, as the camps liberalized in the 50ies, conjugal visits were allowed and where Lev meets with Zoya on 31 July 1956. Jealous, the narrator comforts himself with the thought that after years of separation and deprivation, the sex is not likely to be great. His own relationships in the camp he are nonsexual—after the work, the brutality and the lack of food, the sexual urge diminishes. Lev, however, says the visit is wonderful, promises he’ll give his brother the details which he does only in a letter sent upon his death. Even then the narrator carries the letter around unopened until just before his own death.

As I see it the book is about the brutalization of human beings and the narrator is exhibit #1. The war brutalized him, so that he comes back with a sure fire technique for rape. The camps are worse where there are constant battles between the criminals and the political prisoners (called fascists) and among different groups of the prisoners. There is no day-to-day description of life in the camps—Amis is neither Russian, nor does he have experience in the camps, nor would such a description be enlightening after years of documentation in both fiction and nonfiction. Amis, though, has clearly immersed himself in that long literature and comes up gross and memorable examples of brutality and suffering in the camps. The action in the camps, though, is mostly focused on the interaction between the narrator, who is tough and has leaned how to survive, and Lev, who’s decided to become a pacifist and is vulnerable.

There are no happy endings. The narrator is permanently altered by the violence and brutality he’s lived through, so that even, after Lev’s death when he gets a chance to see Zoya, his sexual interaction is rape. Lev, the pacifist, does not fare any better and dies of heartbreak in poverty and obscurity, having lost his only son to the war in . Zoya commits suicide—possibly expression can only be rape. A counterpoint to the personal in this novel, however, is the brutalization and dehumanization of itself. On a trip back to , to the very place where he was imprisoned and where he will die, the narrator listens to the news and follows the progress of the Breslan school standoff which ends so tragically, botched by Russians with much loss of life.

As one reviewer pointed out the letter from Lev when we finally read it at the end of the novel is anticlimactic. We pretty much guessed. In a final short letter to Venus the narrator debunks her two suggestions for reconciliation in his life: closure and “whatever doesn’t kill you makes you stronger”. “Closure,” he says, “ is a greasy little word which, moreover, describes a nonexistent condition. The truth, Venus, is that nobody ever gets over anything.” It’s also not true that what doesn’t kill you makes you stronger. “It makes you weaker, and kills you later on.” That goes for too, so brutalized that it publicizes the Breslan school situation to dramatize the need for violence in dealing with the Chechans. He concludes, “Let’s not submit to the gloom supposedly so typical of the northern Eurasian plain, the land of compromised clerics and scowling boyars, of narks and xenophobes and sweat-soaked policemen. Join me, please, as I look at the bright side. is dying. And I’m glad.” 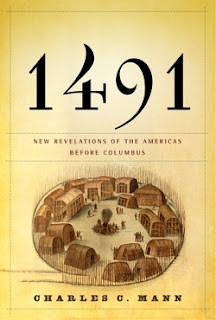 I enjoyed this book far more than I expected to and discovered far more controversy than I expected to find. Mann’s thesis is that ever since “discovered” in 1492, we’ve assumed that he discovered “the new world”, relatively unpopulated, with pristine landscapes and small populations of very primitive people. Turns out that’s not the case. There were cities larger than London in South American, a Mesoamerican civilization invented zero long before it was invented in the old world, and the Brazilian rain forests were cultivated by human beings, not “forest primeval” forever untouched—and unused—by human beings. And most interesting of all—to me—is the suggestion that American notions of personal liberty, leagues and alliances among independent peoples, peaceful protest, even feminism, derive, in part, from the native Americans with whom the European settlers lived. Why after all did the men of dress up as Mohawks when they dumped the tea into the harbor?

Mann is a journalist and a traveler, not a scientist, historian or archeologist which allows him to take a wide view, not an in-depth one. He reports the controversies but doesn’t take part in them. But he notes how amazing it is that the people of the are largely ignorant of the heritage of the continents before the arrival of Europeans in 1492. On the other hand, Mann may be a journalist but this is not a superficial book. In addition to the many specialists whose work he describes, there are extensive notes and a 45 page bibliography appended. So if the Wari or the Tiwanaku (civilizations that preceded the Incas in Peru and Boliva) or the even older Olmec of the Oaxaca high central valley interest you, or if you want to read more details on the various assumptions that go into estimating the pre-Columbian population of the Americas, or you want to know more about natives crops and farming practices, Mann directs you to his sources.