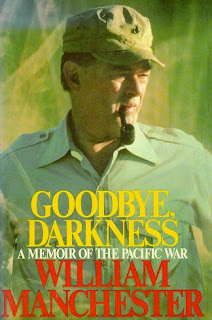 Excellent memoir. I love ’s sensibility. He writes like a passionate and educated man. I’ve read the two volumes of the Churchill biography he finished (and lament that he never finished the other two) as well as The World Lit Only by Fire.

First of all the title is obviously a nod to Robert Graves whose Goodbye to All That has to be the primary literary memoir of WWI. ’s father fought in WWI and was left for dead in the Argonne as he himself would be “left for dead” on . The “darkness” part of the title refers to the circumstances under which this memoir was written. returned to the Pacific islands where he’d fought in 1979 and planned to write this book to exorcise the darkness at the heart of his life that he realized he could only deal with by going back. He was a man with an interesting psychic life. His father died, aged 44 in January of 1941, his health compromised by his war wounds. had what was called “traumatic amnesia” and lost four months he never recovered. He was a student at the time and didn’t recognize the textbooks he studied from or the job he’d done to help defray college expenses. He also had dramatic dreams and just about the time he realized it was time to go back to the Pacific, his dreams began to focus on two characters: a cocky Marine sergeant and the elderly historian and writer he had become.

He’d enlisted, in the Marines like his father, shortly after , had a shot at officer’s training but decided it wasn’t for him, and instead he became a sergeant. He expected to fight the Germans but was sent to the Pacific instead where he lead a group of men who christened themselves the raggedy ass Marines—island hopping all the way to Iwo Jima and Okinawa. All were from the East Coast, trained at , mostly college men, with academic interests and irreverent attitudes.

The organization of the book is both organic and brilliant, the work of a master craftsman juggling balls few writers could manage. Manchester kept a war diary so he didn’t rely entirely on memory, but in 1979 he was an historian who’d done his homework and was able to weave a history of the Pacific war into the story of his own experience so there were at least two takes on the what-happened-then part—his own story and the big picture. But there was also the present, a man in his late fifties revisiting the battlefields of his youth to explore the darkness he’s been unable to face. I suppose one might say the book’s organization goes from south to north, working its was up the Pacific Islands from New Guinea to Guadacanal to Tarawa, to Guam and Saipan and Peleliu and eventually to Iwo Jim and Okinawa and finally to a personal resolution when he saw Sugar Loaf (on Okinawa) and recognized that hill as the meeting place of the cocky sergeant and the old man in his dreams.

It’s an emotional story and is one of the best dealing with both facts and feelings. Let me quote a bit of his conclusion as an example:

To fight World War II you had to have been tempered and strengthened in the 1930ies Depression by a struggle for survival—in 1940 two out of every five draftees had been rejected, most of them victims of malnutrition. And you had to know that your whole generation, unlike the Vietnam generation, was in this together, that no strings were being pulled for anybody; the four Roosevelt brothers were in uniform, and the sones of both Harry Hopkins, FDR’s closest advisor and Leverett Saltonstall, one of the most powerful Republicans in the Senate, served in the Marine Corps as enlisted men and were killed in action. But devotion overarched all this. It was a bond woven of many strands. You had to remember your father’s stories about the , and saying your prayers, and Memorial Day, and Scouting, and what Barbara Frietchie said to Stonewall Jackson. And you had to have heard Lionel Barrymore as Scrooge and to have seen Gary Cooper as Sergeant York. And seen how your mother bought day-old bread and cut sheets lengthwise and resewed them to equalize wear while your father sold the family car, both forfeiting what would be considered essential today so that you could enter college.