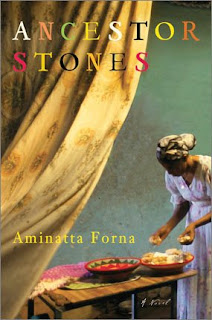 I discovered Aminatta Forna when I read her memoir of her childhood in as the daughter of a Temne doctor and a Scottish mother as well as the search for what happened to her father, who went into politics but refused to be corrupted and who subsequently disappeared. After the civil war which nearly destroyed the country, Forna went back to to visit her family and research her father’s fate. It was getting to know the women in her father’s family that inspired her to write this book, which, though not set specifically in Sierra Leone, clearly chronicles the experiences of four aunts (sisters with different mothers) of Abie, an African woman who lives in London married to a white man but returning to her native country to revitalize the family farming business. The body of the book consists of 16 sections, four each in the voices of the four sisters as they tell their stories to Abie. The earliest story is dated 1926 and the latest 1999. The earlier stories chronicle life in a tribal village that’s relatively untouched by the contemporary world; the later ones chronicle terrifying experiences during the civil war.

The novel does have some problems, primarily with the structure that holds it together. It’s difficult keeping the sisters straight. There’s a family tree printed at the beginning of the book and I found myself referring to it often to see how the various characters were related. I also found myself flipping back again and again to remind myself of the past of the sister I was reading. It was also sometimes difficult to recognize that each of the sisters is talking to Abie. I’d run into a “you” and wonder who she was talking to until I remembered the frame of the novel. That said, by the second set of stories, I found myself hooked on the characters, anxious to know what would happen to them, looking forward to seeing how they would survive the war years. Nothing I have ever read has brought me closer to understanding the lives of African women. When Serah chronicles her loneliness and isolation at a teacher's training college in London, I feel her frustration, not only with the cold and dark but with the lack of color and of human interaction: no one looks at her as she walks through a bigger city than she's ever known, with more people than she has ever seen before at one time, all avoiding eye contact.

The experience of these women is rich and full, and the process of reading their stories is the process of living an African life and coming to problems of the modern world from a cultural experience totally unlike that of women raised in the . It gave me more insights into African life than two years living in as a Peace Corps volunteer. Incidentally it clarified for me why African-Americans were even more “at sea” than I was in that culture. I at least did not expect to “belong”. The main character, Abie, and her counterpart, the author, Aminatta Forna, had to pay cultural dues in order to belong. We see it in how the sisters view Abie, in how their attitudes toward her change, and in how she herself in the end gives up indoor showers in favor of bathing in the river. A bit of an awkward symbol but significant nonetheless.