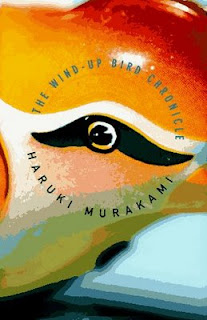 This was a reread for me and I was initially a bit disappointed. I’d been saying it’s my favorite Murakami but when I finished it I was unsatisfied with the ending. The issue in this book seems to me how you read the “fantastic” bits: how can Creta Kano have sex with Toru in their imagination so that they both remember it but it didn’t actually happen? how can Toru think himself from the well to a hotel room where he must do battle with a beast and then back into the well? How do you account for the “other worlds” ? If you assume it’s all Toru’s imagination, then the ending of the novel falls flat and you feel let down.

The story is both simple and complex. It’s about a young man, a lawyer, Toru Okada, who hasn’t yet passed the bar and doesn’t think he wants to, who quits his job and drifts, trying to discover where he fits in the world. Then the cat disappears and then his wife disappears. He doesn’t believe his wife just found another man, as he’s told by her brother, Norobu Waytaya, a brilliant academic turned increasingly influential politician, whom neither Toru nor Kumiko likes or trusts. He interacts with a number of other characters, some of whom seem to belong or have access to other worlds, all of whom have mysterious connections to Kumiko’s family in some way. Some of his greatest insights come after hours and days of deprivation at the bottom of a well. In the end Kumiko comes back.

I've heard readers tentatively call Murakami’s works "magical realism" though most feel somewhat self-conscious about the label because it doesn't really fit. A recent review of the novel and of a book on the Japanese psyche as seen in traditional Japanese tales explains why. Murakami is coming from a very different cultural background. There's no Christianity overlaid on natural gods, for example, as we associate with Latin American magical realists. In fact, far from borrowing from more "primitive" peoples, Murakami's is a fairly sophisticated intellectual tradition: you can think yourself into another world if you're willing to endure the deprivation and anxiety it takes to do so. And in that “other world” you may find answers you can’t find in the “real” world. That I see as the meaning of Toru Okada's sojourns in the well.

I also feel more comfortable with the ending of the novel in the light of what this article says about traditional Japanese tales. The "point" here is that Toru understands Kumiko in the end, which makes it possible for their relationship to continue, though that understanding is never spelled out neatly for the reader who only understands because she has traveled with Toru on the journey. The point is not that the tension in the plot is resolved (i.e., Toru finds his wife) which seems anti-climactic after all he's been through. The point is the journey, the process of understanding. And understanding Kumiko involves understanding the family dynamics which caused her to be "in thrall" to Norobu Waytaya as well as the possibility that her family is responsible (and wants to cover up) its involvement in Japanese atrocities in Manchuria. On another level it's about contemporary Japan discovering its own past, including a past it has wanted to forget. So every bit of what Toru goes through is "necessary" to that understanding he craves—and fears early in the novel that he doesn't have—of this person he loves and wants to spend his life with. One assumes that “understanding Kumiko” also means understanding himself and will help him find his place in the world, but that “conclusion” is not necessary and would indeed seem to simplify the novel.

Something which puzzled me in the book the first time and this time too is why Toru and Kumiko would name the cat Norobu Waytaya in the first place, given that neither of them liked her brother and that both were, frankly, afraid of him. I'm thinking now that it's an attempt to "tame the beast", make a dangerous man into a pussy cat and therefore take him out of the equation of their lives. Unfortunately, it's not that easy and the disappearance of the cat named Norbu Waytaya is the first sign of "trouble". I also think the first sign of resolution is the return of the cat and Toru's unhesitating decision to rename it. Mackerel is just a cat, not an untamed beast. 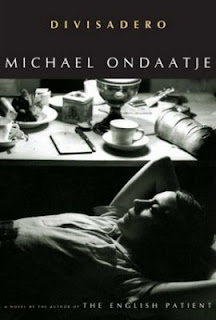 This book is either a failure or presents the reader with a new and unfamiliar structure. I prefer to see it as the latter, though like other readers, I was initially disappointed not to know any more about the initial set of characters.

The story begins with a father whose wife dies in childbirth and when he takes his baby daughter home, he also takes home another baby girl whose mother also died but who had no family to take her in. The two girls, Anna and Claire, are raised together. A third child, Coop, also joins the family when his parents are murdered and he escapes by hiding. He’s somewhat older than the girls. Predictably, there’s a teenage affair between Coop and one of the girls—Anna, the natural daughter. They’re making love in a cabin on the farm near Petaluma when a huge storm arises and the father comes to warn Coop. His anger at the violation of his daughter knows no bounds; he almost kills Coop until Anna saves him by taking a shard to glass to her father. She runs away. Claire saves Coop and he too leaves.

The reader expects some reconciliation, but the novel is not about reconciliation but about how the past affects the present. Coop becomes a cool gambler in Nevada and accidentally meets Claire who’s an investigator for a California lawyer. She saves him when he gets mixed up with some lowlifes he can’t control. But mostly the second half of the novel focuses on a French writer of the WWI generation, the subject of Anna’s academic research. She goes to the isolated French countryside where he resided and pieces together his life, having an affair with Rafael, the descendant of peasants on Lucian Segura’s land, who actually knew Segura as an old man.
The point is not that Anna achieves peace, love and reconciliation finally, but that as her life has been shaped by that one monstrous night on the California farm, so is Segura’s life shaped by the monstrous events in his life, including his experiences in WWI. The parallels and echoes reverberate far beyond the lives of Anna and Segura so that the novel is ultimately more about the intrusions of the past into the present than about specific characters. And yet the characters are unique and memorable.

The prose is lovely. Usually I hate so-called "poetic” novels. That term is usually used for novels with smarmy descriptions that may or may not fit the novel. Ondaatje is just a master stylist, comfortable writing both prose and poems and certainly not someone who decorates a novel with unnecessary flourishes.