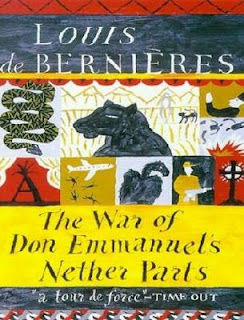 This is de Bernières’ first novel I think and it’s interesting to see how his later style is developing, with different sections devoted to very different characters and story types and with other sections devoted to history, politics, local traditions, and other typically “nonfiction” topics. I can see the writer of Corelli’s Mandolin developing here.

The influences behind this novel are clear: (1) de Bernières spent time teaching English in Colombia and that is clearly the unnamed republic in the book and (2) he must also have spent time reading Latin American authors, specifically Gabriel Garcia Marquez. The novel seems to combine the typical hot steamy novel set in an hopelessly unruly banana republic with the rollicking fun and magical realism of One Hundred Years of Solitude. There’s a good jolt of political satire with a point of view on history that’s different from both the banana republic novels and from Latin American magical realism. It is not quite its author’s own voice—more a trying on and modification of other author’s voices—and I suspect readers of de Bernières’ mature novels will initially be a bit disappointed.

Still once the story gets going, readers will marvel at the author’s humor and inventiveness and rush on to finish it. Starting with the spoiled lady who wants to divert a river to fill her swimming pool and the fat, stupid, brutal army officer the novel progresses through giant cats and laughing plagues, political disappearances a lá Argentina, and the founding of Cochadebajo de los Gatos (“a city of cats beneath a lake”) which figures in the de Bernières’ continuation of the saga—The Troublesome Offspring of Cardinal Guzman.