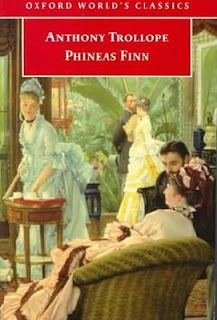 In the second volume of Trollope’s political series. Phineas Finn, the son of an Irish doctor, intended to become a barrister after studying law at Trinity College, but becomes an MP instead and moves into London political society—those in the Liberal party at least. He’s handsome, personable, and does real work. He just can’t afford to be an MP (no salary) except by letting his father support him. In Parliament, he overcomes his initial fear of speaking after a disastrous first attempt and then does his job so well that he’s tapped to be an undersecretary on the Treasury Bench. That means a salary and Phineas seems to be set.

It’s the time of the Reform Bills. The Liberals are pushing but want to move slowly and sensibly. One measure they’re not ready for is Irish tenant rights. Phineas takes a stand that’s different from his party and honor forces him to resign which means no salary and the necessity to go back to Ireland and make some money.
During his time in London he loses his seat twice and is helped to another by political friends. He falls in love with three rich women, marrying one of whom would solve his problems, but he believes in love, not in using a woman’s wealth for personal advantage.

It’s hard to describe what’s so great about Trollope. There are always some good characters, but never without faults that cause them serious problems and complicate the plots. There are some real bad ones too, generally people who aren’t very aware of themselves and their impact on society. Trollope understands political maneuvering—I liked this novel better the second time having read Roy Jenkins’ biography of Gladstone which gave me some background on the politics of the time.

As to Phineas Finn, I’ve read this series before and know he’ll be back. 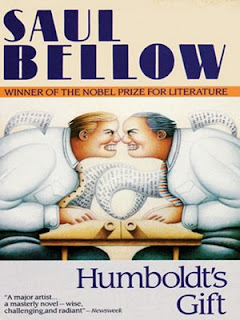 I read this book, probably when it came out in the 70ies, and because I didn’t remember it at all, decided to read it again. It was certainly about a 70ies world—no cell phones and predatory divorce lawyers seemed a new phenomenon—but the basic theme is much older, and if anything more relevant today. Struck me that it had a lot in common with Peter Cary’s Theft which I read recently, namely, the position of the artist in a grossly materialistic society.

The main character—and narrator (Bellow created some great narrators didn’t he?) is Charlie Citrine who, as a kid out of college went to New York to meet and serve his “master”, Von Humboldt Fleisher, the well-known poet (said to be Delmore Schwartz who was an early success as a poet but ended in alcoholism and mental illness and died, like Humboldt in a seedy hotel. Like Humboldt his work was philosophical, meditative and Jewish) who really stands for the prototypical late 20th century serious poet-and what the modern “real world” does to that poet.

Humboldt gets Charlie a job at Princeton but becomes a schemer who can no longer write, while Charlie wins a Pulitzer for his play and becomes a Chevalier of France. Humboldt had earlier insisted that they exchange signed checks with each other, for emergencies, a sign of their brotherhood. But when Charlie is up and Humboldt down, the poet writes a big check on his “brother’s” account. The first of those who raid Charlie’s wealth by scheming. Humboldt and Charlie drift apart, though Charlie keeps track of his friend and feels guilty when Humboldt is found dead in the hotel room.
In the atmosphere of this modern industrial world, represented by the Chicago that is the milieu of the modern artist, Charlie, fascinated by gangsters, investment schemes, violence, fast women, hangs on to his belief that there’s an afterlife and builds on Humboldt’s philosophy. His car is trashed on the street by a gangster; his wife divorces him and her lawyer knows all the tricks to leave him skinned. His mistress absconds, leaving Charlie to babysit her kid while she goes on her honeymoon—marries a Chicago undertaker rich from his chain of funeral homes. Charlie is left with nothing in a pension in Madrid until he’s “rescued” by one of his scheming friends who’s discovered a film made from a scenario Charlie had told him about: one he and Humboldt dreamed up at Princeton, wrote down and documented. And which Humboldt had will to Charlie and his uncle. Charlie reluctantly agrees to prosecute but doesn’t go back to Chicago with his modest gain.

If anything the forces of materialism and greed that defeated the artist in the 70ies are greater now than then.