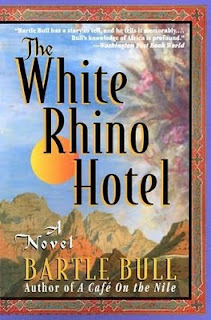 My initial assessment of this one was too sexist and too violent, but I ended up listening compulsively. (It was a sexist and violent time and place.) It's a great historical adventure tale that takes place in British East Africa right after WWI.

The characters are wonderful: an English aristocrat who's gradually sold all his land in England to finance his unsuccessful farms in Kenya. He owns the White Rhino. His barman and manager is a Goan dwarf with great ambitions and a lifetime of resentments against those who've not taken him seriously. The "hero" is a Brit who's mother took him to live with the gypsies (he doesn't know who his father was but his father-figure was the gypsy). He needs space and forest so he takes a job on a ship, jumps ship and goes to Kenya and is well on his way to becoming a "great white hunter". There's a German who fought for the Kaiser in Africa, lives to see German East Africa turned over to the British and his farm confiscated. There's Gwen who travels from Wales to meet her husband, who won a farm in Kenya as the result of auctionan favoring British soliders, but he's been injured and seems unlikely to survive in tough environment. Gwen, on the other hand, wants to succeed in Africa. There are assorted Africans, mainly Kikuyu who will help the outsiders understand the land and their enemies, the Masai. There are assorted dirt bags as well: an Indian who finance the farms for Europeans they expect to fail, a Portuguese "poseur", also out to scam the disabled soldiers, brutish Irish brothers who dispense violence and take what they want, an American hunter. This is not great lit, but it is great adventure. There are two more books which take up this story with some of the same characters, one taking place in Cairo in the 30ies and another in the desert with Rommel and Montgomery in WWII. The author seems to have begun a similar series on China too, covering the early twentieth century time period I've been reading about lately so I'm interested in those too. 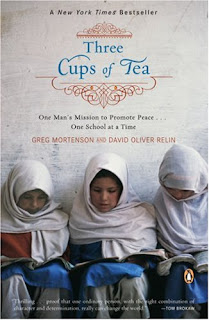 Subtitle is: One Man's Mission to Promote Peace . . . One School at a Time. I loved it. Reminded me of Mountains Beyond Mountains about another compulsive do-gooder, Paul Farmer, in that case in Haiti. Not sure why Mortenson is listed as author since clearly his co-writer did the writing and Mortenson is referred to in the 3rd person throughout. He undoubtedly told the stories and provided the content.

It's the tale of how Mortenson, who grew up in Tanzania as the son of missionaries, went from mountaineer trying for K2 in the Karakoram (and going home to work as a nurse in trauma centers to make enough money to go back) to humanitarian focusing on building schools for children, especially girls, in the mountains of Pakistan. When has to give up on K2, he's separated from his group and ends up in the small village or Korphe where he's taken in by the headman and becomes like a son to the family in the weeks he stays there. He takes in the culture and ends up promising to help them build a school. At home he goes looking for donations and finally finds a backer, also a mountaineer who's been active in the early stages of the semiconductor industry. Mortenson slowly learns how to work effectively in Pakistan, aided primarily by his willingness to learn the ways of the culture, to respect Islam, to dress like the people, and to make friends and keep his promises, and to seek local allies. The one time he didn't follow the advice of his original sponsor in Pakistan--who told him never to go "cold" to a new area but to get the backing of the headman, visiting his home and taking tea with him--he ends up imprisoned by terrorists of some kind in Waziristan.