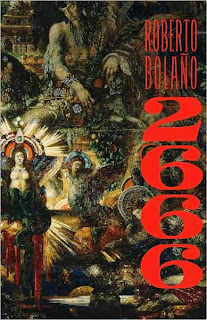 My reaction to finishing 2666 was to start over and read the early sections with the later ones in mind.... I could have read even more than its 900 pages. It didn't seem finished, but I'd have been disappointed if it had all been be tied up in the end. The "theory" of mystery stories is that you begin with the world in order (a green world), then the crime shakes it all up and there is no orderm and in the end, the crime is solved and order returns--the green world. Reinforces the reader's sense of well-being, belief that the world makes sense, etc. Bolaño is looking for a reader who's been frustrated because order is not really returned. Who can't just happily put the book down and move on.

It would be interesting to list all the unknowns at the end of this book. Why does Archimboldi take off for Mexico when he learned that Klaus his nephew is in prison accused of the murders? Does he "just want to help" or does he know something? Is Klaus guilty? if so of one murder or many? Is he spouting conspiracy theories and does he really know something? What happened to him in prison? What happened to Kelly? [I was really into the old congresswoman's story.] What happened to Juan De Dios Martinez?--he was the policeman who captured my imagination. But it seemed likely that many policemen were bent--or just lazy. And a million other questions.....

The novel begins with four international literary critics who specialize in a German author named Archimboldi whom no one seems to have met and who doesn't interact with the literary world. I almost gave up on this book in that first part because the critics were fairly unattractive characters, though their doings were interesting. It seemed to me Bolaño was seeing literary criticism as relatively disconnected with reality. It's in fact an advantage for these four that Archimboldi is a big mystery. I couldn't help but wonder how "good" a novelist Archimboldi is. Maybe the critics latched on to a mysterious character about whom they can speculate and build theories without actually confronting an author who might foil their theories. (Though most critics would probably love not to be troubled with the real-life person who wrote the books.) The critics travel together (to make sure no one gets a leg up on anyone else?) to Mexico--Santa Teresa--where rumor has it Archimboldi has been sighted. While they are there the reader gets a preview of the mysterious deaths of women in that city which will become the focus of the novel in Part Four.

The second part focuses on Almalfitano a Chilian academic who'd lived in Barcelona but is now living in Santa Teresa with his daughter. The reader met him as he interacted with the critics in the previous section and, because the killings of women in the city has been mentioned, the reader's focus is particularly on the daughter. Part Three traces a black American journalist, Fate, who goes to Santa Teresa to cover a boxing match. He doesn't know much about boxing but does get interested in the killings of women.

In the longest section of the novel, called The Part about the Crimes, Bolaño chronicles the cores of scrime victims, mostly poor women, prostitutes, workers in the factories of northern Mexico, many of them immigrants from poorer provinces or other Latin countries, many on their way to the US. This is the longest and the most emotionally powerful part of the novel. Interspersed among the "crime reports" are interesting stories like the affair between the policeman and the director of an insane asylum and the story of an aristocratic congresswoman whose best friend from childhood has disappeared.

Only in the last part of this novel do we learn who Archimboldi is, a young Prussian who experienced WWII in the German Army and used a pseudonym to publish his first novel because he'd killed an degenerate officer and assumed someone might be looking for him. The violence that he experienced, both in the war and its aftermath, is as detailed as the war on women in Santa Teresa. The novel ends as Archimboldi sets out for Mexico--so the critics are right that he was there--but we never know more.

One cannot help but look at the two sections that bracket this novel: the literary critics and the author they explicate. There may be a comparison between what the critics put their energy into (basically theoretical thinking which we have no way of evaluating: either Archimboldi's novels or the critics' evaluations of them--and the evil in the world that we see in Santa Teresa. Bolaño may be saying that as a novelist he (and maybe Archimboldi--I'm not sure about that) is dealing with real evil in the real world while the critics are insular and self-absorbed, in their work and in their play (i.e. sex).

The bottom line on this novel is that it looks at incredible violence in the world which is pretty much accepted as everyday reality. I guarantee you if you read it you will not forget it.