I have liked all the books I've read by Tóibín. Not as enthusiastic as most about The Master (I suppose I think an emphasis on homosexual tendencies detracts from Henry James' accomplishments. I liked David Lodge's novel about James better--though I think absolutely nobody agreed with me.) I loved Blackwater Lightship. Tóibín's take on the psychology of all the characters is perfect in this novel about a family crisis when the mother, grandmother and sister of a young man come to terms with his homosexuality and ultimately his final days with AIDS. That emotional authenticity I found also in Brooklyn: A Novel.
Eilis Lacey is the main character and it just occurs to me that Tóibín handles this point of view with a technique "the master" called Centre of Consciousness, meaning it's a third person narrative but one that sees the world only from the character's point of view. James described it as looking through a hole in the head of the character so you see the world as that person sees it.
It's the 1950ies in a small town of Enniscorthy in Country Wexford, Ireland. Eilis lives with her mother and older sister, Rose. She's shy and awkward and feels insecure because she's not been able to get a job. Rose on the other hand has a responsible job, dresses well, is socially assured and plays golf every weekend. She advises Eilis on clothes and boy friends and jobs. Eilis looks up to her so when Rose talks to a priest from Brooklyn about job possibilities for her, Eilis goes along and before she knows it she's on the ship in third class and sick as a dog in the worst storm of the season.
Eilis' story must be a typical one from a single woman coming from Ireland, supported by an Irish priest in an Irish parish where "strangers" are mostly those from different parts of Ireland. It's a narrow world, but not as narrow as the small town in Ireland for she meets Jews and Italians and other immigrants. The priest finds her an Irish landlady and a job as a shopgirl. Initially Eilis is nearly overcome with loneliness and home sickness until the priest enrolls her at Brooklyn College learning bookkeeping and commercial law. She's bright and does well and her studies provide the interest she hadn't initially had.
At a parish dance, Eilis, still shy and gawky, meets Tony, born in Brooklyn of Italian parents. He's gentle and respectful and obviously in love with her, though there are hints that what Tony has in mind for the future (marriage, a house and construction business on Long Island, raising Dodgers fans) might not be enough for Eilis who's got more intelligence and more curiosity than Tony.
When Eilis returns to Ireland after a family tragedy, Tony persuades her to marry him secretly before she leaves. But back home, no longer so shy or unsure of herself, with American clothes and a tan, Eilis, who hasn't told her mother about her relationship with Tony, is a social success, courted by the very man who'd ignored her before. Now she is in danger of really falling in love and a role for her at home in Enniscorthy lies open before her. She doesn't open Tony's letters. Until a gossip who's been on the phone with her landlady threatens to spill the beans.
The emotional truth of this novel is perfect. It's what I've come to expect with Tóibín.

The Lacuna by Barbara Kingsolver

This book didn't get great reviews, but I've liked every one of Kingsolver's books since I started reading them with The Poisonwood Bible. I haven't read her earlier works. And I liked this one a lot, though not unreservedly. 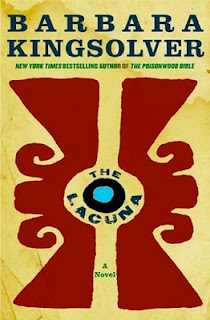