The Passage by Justin Cronin

I heard the author on the radio--he's an English prof from Rice--and was interested even though this is not my kind of book. I don't generally like sci fi and I really don't like distopian novels. 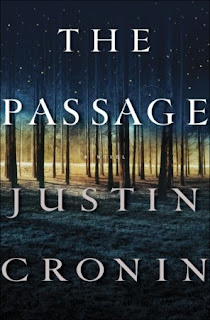 That said this novel definitely held my attention and there was no chance that I wouldn't finish it. At the end, I'd have picked up the next book had it been available, but I'm not sure that I'll really go looking for it when it does become available.

It's well written, "literary" in the sense that each section begins with a quote, usually from Shakespeare. It's imaginatively plotted but gets sort of predictable. Particularly annoying is the fact that I would always predict where a chapter would end (I was listening to it on audible). There would be a dangerous situation. The tension would build and then the chapter would end with a suggestive section such as "He took three steps...." and the next chapter would switch to another set of characters. Effective in maintaining tension but it got tiring and predictable. In fact the book ended that way, so it's no wonder I'd have grabbed the next in the series had it been available.
There were some good but not great characters. Exactly who was the central character wasn't clear. That way at least you never knew who might get killed. There's a lot of violence and death. I'm sure this will make a popular film, but not one I'll go to.

There are some pertinent themes. This is not a mindless adventure novel. I wondered if the author had read The World Without Us because he deals with the remnants of our own civilization. The themes are at least not pretentious as in Cormac MacCarthy's The Road