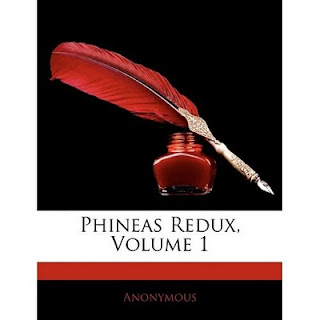 I'm slowly rereading Trollope's political novels and just finished #4, Phineas Redux. In the first Phineas book the likeable (maybe one of Trollope's most likeable characters) Irishman wins a seat in Parliament and makes his way quickly into the homes and political circles of the Liberal Party. He falls in love--almost immediately--with Laura Standish who's the daughter of an Earl. She should have been male--she's that interested in politics and undertakes to make Phineas' career, but she marries an elderly rich man, Robert Kennedy (a calculated move because she didn't love him). Phineas is heart-broken but immediately finds another woman to love (who also marries someone else). He gets involved in a political issue, though, where he has to act on his conscience which means he has to leave the government and he can't afford to be only an MP (no salary). So he goes back to Ireland and marries his childhood sweetheart who rather quickly dies in childbirth.

Phineas Redux is about his second foray into politics. Likeable as ever, he still have limited means and, though, elected to Parliament, has to have a government post to make enough money to survive. But the gods are against him. Laura Kennedy has left her husband--who's tormenting her with his extreme religious practices--and he blames Phineas Finn whom Laura has discovered she really loves. Phineas is over that but kind and compassionate and mets her whenever she requests to give the support and advice of a friend. But the salacious press gets wind of the story when Robert Kennedy makes public his efforts to "get his wife back" and blames Phineas Finn for her leaving, implying an affair. Laura has to leave the country with her father to avoid the law compelling her to go back to her husband. Phineas, the good friend as ever, acts as go between and is attacked by friend and foe, even to the extent that the leaders of the Party avoid picking him for government office.
The political insights in this book, apart from the somewhat dated prose, could be written by today's political pundits. It's both amusing and horrifying to realize that very little has changed.... Amusing too that Plantagenet Palliser (sort of the central character--well his wife is maybe more central) is angling all the time to convince Parliament to adopt a decimal currency--Trollope never knew it would ever be accomplished--in fact the first time I went to London counted out 10 pennies for some tourist attraction that cost a shilling, the ticket taker just glared at me and held out his hand until I sheepishly remembered there were 12 pennies in a shilling.....
Phineas quarrels with one of the party hacks who's most critical (on moral grounds) of his supposed affair with Lady Laura and the next thing we know Phineas is in Newgate accused of murder and in danger of being hung with only circumstantial evidence against him. (Very frustrating--one wants finger prints, blood types, DNA....) And I haven't even mentioned Madam Goesler (rich, dark-haired, young and somewhat mysterious Viennese widow) who's taken up by Glencora Palliser and becomes a fixture in Liberal political circles...who is Phineas' friend and had even proposed to him in the first book, though he'd refused, not wanting to be seen as a poor man angling for a rich wife.
Trollope's world is simple compared to ours but his analysis is far from simple. It's psychologically convincing. His political insights are perfect. And Phineas is a most delightful character.