The Unknown Terrorist by Richard Flanagan

Flanagan states the thesis of this novel--for it is a novel in service of an idea--right up front: "The idea that love is not enough is a particularly painful one. In the face of its truth, humanity has for centuries tried to discover in itself evidence that love is the greatest force on earth."
I thought The Unknown Terrorist was terrific, but not at first. It was more than just well-written. Flanagan is a dynamite writer, but it seemed to me it was all set up perfectly and it was clear what would happen. True enough. Then about half way through, having left the book idle for weeks on the bedstand, I picked it up again and suddenly couldn't stop. True enough it played out as I expected (and it turns out Flanagan says he took the plot from The Lost Honour of Katharina Blum by Heinrich Böll) but the text and the commentary on trust and truth and love in our culture was phenomenal. Far more powerful than any political tract.
The main character is "the Doll" or "Krystal", a pole dancer at a gentleman's club called The Chairman's Lounge in Sydney. Her real name is Gina Davies. She's in her 20ies, living a completely materialistic life dressed in designer clothes, eschewing banks and stashing cash to the amount of nearly $50,000 for a down payment on a apartment. She's chosen to exploit her body because she can make real money and buy some respect--more than she got of either at a call center. One night she meets the handsome Tariq at a Carnival and spends an passionate night with him.
At the same time Richard Cody, aging TV anchorman in danger of being eclipsed, recognizes her in a surveillance photo with Tariq who's become a suspect in a failed stadium bombing that has scared the population and made it necessary for the perpetrator to be caught and punished. Cody recognizes her because she snubbed him outside The Chairman's Lounge. As security and news and government personnel seek to find the would-be terrorist, they latch onto Tariq largely because he's disappeared, though they later find he's been in and out of Pakistan (where he has relatives and where he's gone to collect drugs). Richard Cody identifies Gina in the photo and decides to consider her an "accomplice" to the "terrorist".  As the authorities pull out all the stops to find her, Cody plans a TV exclusive that will show the government at work to catch the dangerous terrorists--and fast. He ignores the possibility that Gina--and even Tariq--might be innocent.
When Tariq's body turns up in a trunk, Gina becomes "the terrorist" and a likely murderer as well.  By that time the government, the security services, and Cody and his TV network have too much at stake to care about the truth. After all a programmer cum low-level drug dealer and a pole dancer are just the sorts you want to accuse of being "homegrown terrorists" if you have to accuse anyone--and of course they do in order to ally public fears and remain in control.
As she flees, the reader learns more and more about Gina, both why her background makes her the perfect "fall guy" and why she is afraid to try and clear her name by going to the police.
I've read two others by Flanagan: Gould's Book of Fish and Wanting, both of which I liked and both of which were rich  in the kind of cultural observation that really makes sense to me, but neither with the sheer power and single-mindedness of this one. I'm not saying that makes it a better novel, but it makes it maybe the best political argument I've read in a long time. I will recommend that everyone read it. 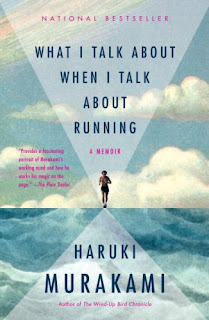 I enjoyed this short book even though I've not much interested in running or racing (or swimming or biking competitively for that matter). I thought it was honest and certainly not overblown. I felt like I got to know the person a bit more and since I've liked everything by him I've read--some of it among the best contemporary novels I've read--I liked learning more about the person.
This book doesn't by any means give a total picture of his life. For example, he mentions a "wife" fairly often and occasionally gives the reader tidbits about her, but we don't know her name or much about her at all: she came from a family with business sense, she encourages him in all his races, she had a swimming coach whom he subsequently used and liked. I presume it's been the same wife all along.
I does tell me about how he decided to become a novelist and how he works, without, though, ever discussing his work. The only titles he even mentions are early novels and Blink Willow Sleeping Woman and that only in the context of having to write an intro for the collection of stories. Still I know more about the man writing that I do about most writers through memoirs.
Running--the way he goes about training and "performing"--becomes a metaphor for his writing process. I also liked that his priorities were clear. If a race that might take even more prep presents itself he may decline on the basis that his reason for running was to be healthy and fit enough to write novels into his old age.
I like that he's stubborn and persistent and private and doesn't try much to be anything else.
I'd rate it 9/10 as memoirs go.