The Picture of Dorian Gray by Oscar Wilde 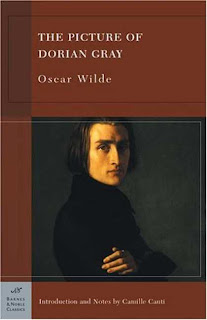 This is one book I've known about--and known the plot of--for years but never read. The proposition seems to come right out of a Gothic novel: a moral tale translated into something literal. Dorian recognizes his own perfection of beauty and innocence in the portrait painted by his friend Basil--when Basil's friend Lord Henry calls attention to it. And when he hears Lord Henry lament that it's all downhill from there, Dorian utters a wish that the portrait would age and he'd stay the way he is in the portrait. It's like when the troll in a fairy tale gives you a wish and you toss off a comment in the form of a wish and he makes it true.

Lord Henry is rich, idle and curious and amuses himself by trying to corrupt the beautiful boy, Dorian. He is successful beyond his dreams because Dorian embraces his lifestyle--far more seriously than does Lord Henry himself so that in the end when Dorian asks him what he'd say if he told him he'd killed Basil (whose mysterious disappearance has been the talk of London society), Lord Henry replies that he wouldn't believe it, because only the lower classes actually commit crimes.

In fact Dorian did kill Basil after showing him the portrait which after many years shows not only age but the dissipation and cruelty into which Dorian has fallen. Basil's horror causes Dorian to kill him and then to bribe an acquaintance to get rid of the body. What the bribe was we never know but the man killed himself rather than live with what he had done. As had an innocent girl many years before whom Dorian wooed and then cruelly left. We're to assume there were many more such betrayals in between.

Early in their relationship Lord Henry had given Dorian an 'immoral book' the contents of which we can only imagine. Dorian seems to have taken it as a guidebook. One imagines that Lord Henry found it primarily amusing and was amusing himself to see its affect on Dorian. And Wilde, of course, is playing with the idea of whether or not a book can be immoral as critics of the time pondered the idea of whether a book written by an immoral man could be a good book.

Today when Wilde is taken seriously as an artist and his homosexuality seems quite irrelevant, these issues of morality in art or in human conduct are still as perplexing as they were when the novel was written.

The dialog in this novel, quite apart from the heavy Gothic plot, is quite as delightful as The Importance of Being Ernest or Lady Windermere's Fan.

Citizens of London: The Americans Who Stood with Britain in its Darkest Finest Hour by Lynne Olson 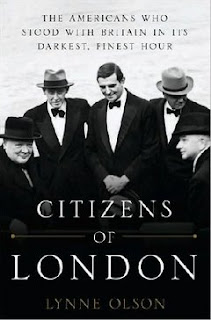 The focus of this book is the relationship between Britain and the US as allies in WWII, a close alliance which a recent history of the war by Andrew Roberts credits in large part with winning the war. That’s not a new insight but as we move away from the “greatest generation” myth and begin to examine the reasons why this alliance might have failed, those most dedicated to its success demand close attention and that’s what Olson does.
The main characters are John Gilbert Winant, who took over as US Ambassador from Joseph Kennedy—who’d advised Roosevelt that Britain was doomed and help would not be effective, Edward R. Murrow who matured as a major force in broadcast news, bringing the plight of the British people to Americans by his broadcasting during the Blitz early in the war and then becoming the major interpreter of the European war for the ordinary American, and finally, Averill Harriman, who went to London as the administrator of Lend Lease but involved himself in many other aspects of the relationships.
Other Americans focused on were Eisenhower and Thomas Hitchcock,  a playboy who'd been in the Lafayette Escadrille in WWI and acted as an advisor to the Air Force in England. He was responsible for getting the US to adopt the P-51 Mustang fighter, which allowed US bombers to have a reasonable chance of getting away after bombing German cities. (http://www.acepilots.com/planes/p51_mustang.html).
The book covers all aspects of the lives of these men. With Winant, the focus was on his relationship with the British people and particularly how popular he was in Britain—recognized on the street and loved by ordinary people. I don't think I'd ever heard of him and probably he's better known in the UK than in the US. With Eisenhower there's a recap of Operation Torch (North Africa) since that was his baptism of fire as well as much discussion of how Ike balanced the needs and the egos of British and American generals. With Harriman the focus was on how he competed with Winant as the principal American influence in Britain and on his affair with Churchill's daughter-in-law, Pamela. In fact the love life of top figures representing both the US and Britain was a major issue in this book. It seems that the movies were not really wrong in portraying wartime London as a venue for love and sex. Murrow also had an affair with Pamela Churchill and Winant, with Sarah Churchill. Pamela has multiple affairs with influential men simultaneously.
If the book has a flaw it's that the author is emotionally attached to the protagonists and one wonders about her objectivity. She almost idolizes Winant, pretty much likes Murrow but doesn't like Harriman very much at all. Curiously while Churchill had a great relationship with Winant, he liked Harriman more. He was more of a rake, a sportsman and hard drinking man and Churchill preferred the hard working/hard playing type.
Olson dealt with issues like the influx of American servicemen into England. One thing I didn't know was that the American Red Cross set up service centers but refused to admit any British or other Allied servicemen, which policy Winant and others thought discouraged good relationships with the British. When asked by American officials to make changes the Red Cross conceded only that British officers who were invited by Americans could eat there but that's all. No British woman were allowed to work for the American Red Cross either. The book also dealt with the issue of race which has been examined at some length recently in books and movies. The British, not surprisingly, were horrified at how Americans treated black soldiers; the Americans didn't want to make big social changes in the middle of a war.
There's an interesting section on the relationship between Churchill and Roosevelt, especially toward the end of the war when the US began flexing its muscles and making decisions without involving the British. Olson sees the relationship as cooling considerably and believes that Churchill's decision not to go to Roosevelt's funeral reflects that changed relationship. After a number of recent books exalting that relationship, her point of view made me rethink some of the mythology of the relationship.