I'm not a fan of scifi, but I am fascinated by time travel. Not much interest in the future, but very interested in anything to do with time travel to the past. Years ago I read Connie Willis' Doomsday Book, about a history department at Oxford that does research by sending people to the past. 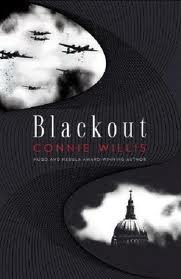 I recently read her long short story The Winds of Marble Arch which for some reason isn't available in book form (I suppose it's a collection of stories) except at exhorbitant prices.They did have it at Audible. Not nearly as good as I expected--good thing I didn't shell out for an expensive used copy--and not really about time travel, just about "leftovers" from the past in the tube stations.
So then I got Blackout, the first in a two-book series about sending people to research London during the Blitz--from the same time and history faculty as Doomsday Book. Really well researched, though she makes a few mistakes in British culture--but not significant enough even to remember. Three time travelers go to different parts of Britain in the summer and fall of 1940, one to Dover (to study "heroes" in the Dunkirk evacuation), one to Warwickshire (to study children who'd been evacuated) and one to London (to study initial reactions of ordinary people to the Blitz). There are a couple of others, like one woman sent to the time of the first V1 rockets who seems to drop out of the book. The three have adventures but all discover that they can't get home, though whether because the "drop zone" was inaccessible (one was on the beach south of Dover and had an antiaircraft gun on it) or not working was not clear, though by the end of the novel it is clear that something is really wrong in the time travel world. Each suspects they've inadvertently done something to "change history" and screwed up the balance of a chaotic system and maybe caused the allies to lose the war.
But this novel just ends. Adventures, character development, plot element but absolutely no resolution at the end. Just tune in to the next book for the resolution. That makes me furious and seems pure commercialism. Harry Potter books all had individual plots and individual integrity as novels. So I think do all those series books kids reads. Frankly though The Lord of the Rings was a little shaky in that category. I felt a little anger at the end of Ghosh's A Sea of Poppies, which is also a first in a series. But the whole idea of a series is that each book has an individual plot which has some resolution and internal integrity. Blackout has NO RESOLUTION AT ALL. On the audiobook, the reader blatantly said to get the next book to find out what happens.
The next book is called All Clear and I'm sure I'll read it because I want to know what happened and did get interested in the characters. BUT I DO NOT APPROVE.