Berlin 1961: Kennedy, Khrushchev, and the Most Dangerous Place on Earth by Frederick Kempe 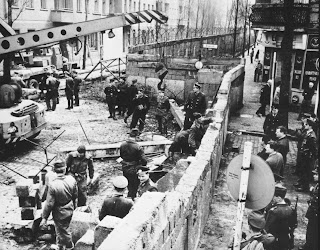 Finished this one last night. I read it because I was in Berlin--the only time I've been there--in the summer of 1961. I was a student in a summer program for foreign students in Bonn and the week-long trip was part of a program where the Federal Republic wanted to influence foreign students to care about reunification. As I understand they paid for the trip. Makes sense though as I read this book.They particularly wanted the US to be for reunification and after being fed all the propaganda including lunch with Willi Brandt at the Rathaus Schöneberg where we each got to shake his hand, we generally did. I don't remember what Brandt said, but I liked him and believed him right. The trip was the last week in July 1961, two weeks before the wall. I remember getting up on the morning of August 13 and reading about "die Mauer" in the paper. Kempe says that no one called it "the Wall" until several weeks later but I remember distinctly that the word was used in that morning's Bonn paper. And somehow I got the impression it was a brick wall and struggled to make sense of what seemed so stupid in the nuclear age, a brick wall to keep people in. Of course, we knew about the flight of the East German population. That had been evident everywhere that July. We had people come up to us and ask if they could trade East Marks for West Marks. We usually did. A bit of help for the refugees since their currency was worth far less than the East German exchange rate--might not even have been convertible. But also gave us currency to use when we visited East Berlin as we did every chance we got. At 19, I was excited seeing "real" Russian soldiers (with their knee high black boots and slick gray uniforms, they were far more impressive than the wrinkled Volkspolitzei). There was a Russian memorial just outside the Brandenburg Gate, on the West Berlin side actually, and the crowds of tourists (mostly American I think) harassed the soldiers guarding it. Americans at the height of the Cold War were excited to see the "great enemy" up close.
The book paints a pretty dim picture of Kennedy in the tilt with Khrushchev and suggests that had he taken a stand against the wall, we might have been able to end the Cold War earlier. After all, Khrushchev had responded to Kennedy's election by printing his uncensored inaugural address in the Russian papers sending his a personal letter. Kempe is pretty down on Kennedy, though he does credit him with learning enough about dealing with Khrushchev to weather the subsequent Missle Crisis--though he suggests that that wasn't really the scary  confrontation the public thought it was. (I remember being too worried about a History test and my need to show that prof I wasn't a dolt to worry much about getting blown up.)
It also shows how little I understood about politics and world affairs at the time. I thought getting even close to the Communists was great fun. I came home with stories about the bridge where they exchanged prisoners, about headlines routinely in red type in East Berlin, about the dearth of goods in the GUM department store (and how it contrasted with the lavish display windows--including some glass stands out on the sidewalks--on the Kurfürstendamm), about the people who would get on our bus as we toured the East and regale us with stories--and then politely ask to be left off at the border crosssings. There were crossings then where you had to show papers (anyone with an allied country passport was not hassled) but no wall. Often you could cross without being stopped. The East German border was more dramatic (we traveled by bus), with the searchlights and plowed strip just like in the spy movies.
But I didn't understand anything at all about the politics and saw both the refuge problem and the border closing as mainly concerning the people of the East. I didn't expect the US to do anything. I suppose I thought we could do something if we wanted to. I didn't even think about why we'd want to. I understood that our trip was financed by the Federal Republic so we'd support Wiedervereinigung (reunification) but did support it so didn't think much about it. The college that sponsored our summer abroad forbade us to go back after the Wall and I, with my friends, pooh-poohed the danger, but I didn't have the spending money to go back anyway.
This book is worth reading, though if you see Kennedy as a hero, somewhat painful, but I doubt that it's completely wrong-headed, though maybe his speculations about ending the Cold War earlier weren't entirely realistic and he acknowledged the logic of Kennedy's rationale: "A wall is better than a war." The real issue was how likely Khrushchev would be to jump to a nuclear war. Then our assumptions (at least mine and I think most of the public's) were the Russia had superior military might and possibly more nuclear weapons. They certainly had more fighting power in and near Berlin. But Khrushchev seemed a real person, not just a cardboard bad man, scruffier but just as bad as Nazis in the movies--as all the other Russian leaders seemed.
In retrospect Khrushchev was not at all anxious for war, but most of us didn't know that. Still Kennedy did pretty much know that. He had a private correspondence (through RFK and a Russian spy), but Khrushchev also seemed impulsive, the sort who might start a war because he was mad. And Kennedy was haunted by the thought that he'd be the President who unleased a nuclear war.
The introduction to the book was written by Brent Scowcroft for what that's worth.

Destiny Disrupted: A History of the World Through Islamic Eyes by Tamim Ansary 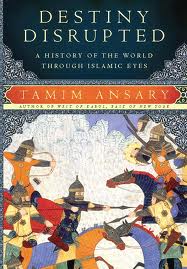 A good friend actually turned me on to this book, six months ago or more. I bought it but in spite of liking the intro, put it down for other things. So I nominated it for the nonfiction group I'm in and when it was chosen started reading it seriously.
I really liked this book and I think I'd like the author. He's lived in the US for a long time and understands American history, politics and public opinion. He's not religious himself and has a great command of English as well as a considerable sense of proportion--and of humor.
He divides the world into 3 parts: The West (Western Europe and the Americas), the East (Asia and the Pacific Islands) and what he calls "The Middle World", the part of the world that includes the what we'd call the middle east, north Africa, the southwestern ex-Soviet republics, to India (under the Moghuls).
The first part of the book is a history of the Muslim world (the Middle World), from Mohammed through the Khalifates and beyond. It focuses almost exclusively on that part of the world, but beginning with the Crusades, Ansary incorporates incorporates the interface between the Middle World and the West (only though when Europe becomes reasonably civilized since initially it was just a huge expanse of barbarian territories). And when West meets Middle, he reports history from the Middle (Muslim) point of view. The book culminates with the three great Muslim Empires which coexisted and lasted (at least one of them did) until WWI: the Ottoman, the Safavid (Persian) and Moghul (Indian). Increasingly as the book comes closer to our own time--he stops basically at 911--he articulates the attitudes, opinions and prejudices of the Muslims, but the fact that he understandsIran the corresponding attitudes, opinions and prejudices of the West is critical. He's particularly interested in the various secular modernist reformers, seeing in their efforts a desire to incorporate industrialiam and the industrial goods of the West without considering the role of the social structure of Western Europe in the technology they created.
The various schisms of Islam are explained. (I finally understood who the Pakistani pilgrims were with whom we shared a small hotel in the Khan al Khaili area of Cairo. They were Shi'ite pilgrims to the Hussein Mosque and Hussein was the grandson of  Ali (the 4th Khalif) who was descended from Mohammed's "favorite wife" Fatima. The difference between Sunnis and Shi'ites became clearer and it also became clear that there were many varieties of each.  There were interesting tidbits like the Sikhs whose religion was originally an attempt to amalgamate Islam and Hinduism and the various Sufi sects that were offshoots of Shi'ism. The rise of Wahibism was interesting too--the first Ibn Saud embraced Wahibism in the 18th century, long before the family became powerful and organized the Arabian peninsula as Saudi Arabia.
As the history becomes more modern Ansary focuses on 20th century history from the point of view, for example, of Iran (the US overthrow of Mosadeq and restoration of the Shah), of Egypt (Suez Canal crisis) and of Palestine (Israel emergence as a state)--to name a few instances. In the early part of the book we were learning the history of the Muslim world, isolated as it was, but as the story progresses we're beginning to understand our own history as seen in the Middle World.
This is a very readable book. I recommend it highly.