In the Garden of Beasts: Love, Terror and an American Family in Berlin by Erik Larson 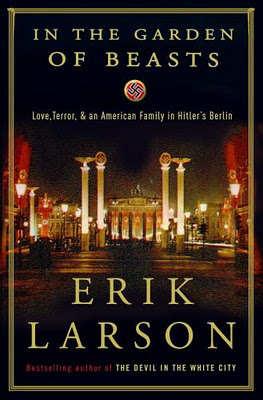 I just finished this one and continue to think that Larson hasn't ever come up to his first book (Isaac's Storm). I enjoyed the one about Chicago and the Columbian Exhibition but didn't think the big subject (Columbian Exhibition) and the little one (murder) were well integrated. In Isaac's Storm, the larger issue (1900 Galveston hurricane) and the smaller issue (the weatherman who didn't predict the storm) were inextricable since Isaac himself had harrowing experiences in the storm. But in all of his other books (I'm not sure I read the one before this one) he struggles with the two stories he's trying to tell, this big historical one and the small one about individuals.

On this one I thought initially that Martha Dodd was the major focus. I looked her up on Wiki and found she was supposed to have been a Soviet spy and indeed spent her last years outside the US. So I expected a spy story and perhaps an embarrassed father. But it turns out that really Dodd is the "hero" of the the book, recognizing early that Hitler's regime is dangerous and also rebelling against aristocratic tendencies in the US State Department. There's an epilogue on what happened to Martha, which give less credence to her spying than did the Wiki article. But I found her relatively unlikable and certainly not credible as an effective spy or even as thinker about political realities.
Larson's documentation of the growing threat of the Hitler regime, though, is well drawn as Larson follows Dodd's willingness to give the Germans the benefit of the doubt at first (he's gone to school in Germany and was initially predisposed to like the people and support its government) to his gradual realization of the brutality and inhumanity of the Nazi regime. One question I had was what happened to the Jewish owner of the house on Tiergarten Strasse which the Dodd's rented. The owner lived on the 4th floor of the house, evidently thinking he'd be safer living upstairs from the US Ambassador, but the last we hear of him is when he brings more of his family to live with him and it gets noisy. Dodd has second thoughts. That's still relatively early, 1934 or so, but Larson never mentions him again. I would have assumed he'd follow that through and at least say so if no information was available.
I listened to this book on Audible. The reader is a good one but impossible at foreign pronunciation. He got the German right in short common phrases, but over and over again he blasted through passages in German he couldn't handle at all. He was no better with the Russian.
Aside: One of the things I really hate about recorded books is readers who get the pronunciation wrong. There's a reader of Dickens novels who's great at dialects and really performs the novels superbly, but he can't pronounce English place names. On the other hand it adds a great deal when a reader knows the language of the original or of the place that's the focus of the book. I listened to Bolaño's 2666 and also The Savage Detectives and loved that the reader (readers? not sure if they were the same) was clearly also a Spanish speaker.