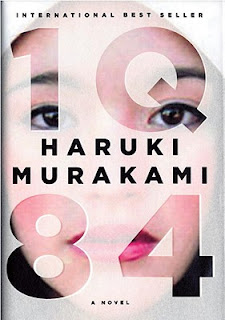 1Q84 s a book about parallel universes. Not in the SCIFI sense so much as in the moral and a human sense (though there are SCIFI elements). A book about what happens to people (in this case, Aomame and also Tengo) who get off the track in their lives and have to go through some scary stuff in order to get back. It starts with Aomame in a taxi on a freeway in a traffic jam (listening to Janacek's Sinfonetta--which becomes a theme) choosing to get out of the cab and climb down an emergency access stairs to the surface. When she leaves, the cab driver tells her to remember that appearances to the contrary there is just one reality.

But soon it appears that's not true and the world she climbs down into seems different. Her first clue is that the police have different uniforms and are carrying heavier fire power than she remembers. Eventually the icon of the "alternative world" dubbed 1Q84 instead of 1984 (references to Orwell intended) is the second moon in the sky, smaller than the "real" moon, slightly lopsided and green.

Aomame is a serial killer ... of sorts. She happened into that line of work though an elderly rich woman who becomes a client (Aomame is a physical therapist and trainer). Together they target men whose crimes (often but not always crimes against women) that seem not likely to be addressed by the legal system. Aomame's work with the body has put her on to a spot on the back of the neck where she can kill someone instantly leaving no marks. Her job often calls her out to use her skills to help busy people relax which gives her opportunity. She's devised a weapon--a thin needle she keeps in a pouch in her purse. The Dowager identifies the targets and arranges access. Aomame is convinced once the Dowager coaxes her that the men they target deserve to die.

Tengo was a math prodigy in school but has lost interest in math and is playing around with being a writer. He's not published anything yet, but he writes on his days off from the cram school where he teaches math, though on one day a week he frolics with his married lover. He as no friends and few others he sees or talks to. He lives in a old, slightly run down apartment building, cooks for himself and writes in his spare time. When the novel opens, he has been working with Komatsu, the literary editor of a periodical that awards a prize for young and new writers. Tengo has contributed in the past and impressed Komatsu but has never won a prize. This time Komatsu shows Tengo an unusual manuscript which has caught his attention and which he thinks might win not only this prize but a bigger, more prestigious award if it's edited some (actually re-written). The author is a 17-year old girl. Komatsu wants to make into a "star" out of her which will bring money to his publishing house--and to himself and Tengo. Tengo is more that a little skeptical--after all it will be fraud--but he's a relatively passive young man and Komatsu is compelling. Besides Tengo is fascinated by the manuscript of Air Chrysalis.

So we have two basically decent 30-year-olds who have been drifting and two determined and manipulative adults who influence them. It's important that neither Komatsu nor the Dowager is particularly evil. Each has a strong sense of morality and a determination to take matters into their own hands. Both demand (and in most ways deserve) loyalty. Both are loyal in return.

Finally, there's a religious cult called Sakigaki that professes just to be a farming community in the countryside. No one knows much about them, but we learn from Professor Ebbesuno, who's informal guardian to the girl who wrote the manuscript, that she evidently ran away from Sakigaki at age 10 and came to live with the professor who was a friend to her parents. She will not talk about Sakigaki or her parents who have never tried to contact her.

The major portion of the novel consists of sections devoted to Aomame and Tengo alternately. Not exactly first person narratives, mostly third person with the first person (thoughts mainly) printed in italics. We assume after the early chapters that there's some connection between the two but it's a long way into the novel before we learn that Tengo once held her hand when Aomame was a 10-year old girl ostracized in school because her family was associated with a strict religious group. Neither has ever forgotten that. Both somehow assume that the other (if they can find the person after 20 years) is the only person they can be close too, can love. And we learn that Aomame left her parents and their strict Seven-Day-Adventist-type religion at age 10. Tengo believes his strict father is not his real father and has only one enigmatic memory of his mother.

Both eventually discover that they are living in an alternative world, one with two moons and a few others things askew. What happens in this alternative world (in 1Q84) can be impossible in the reality that we know and that they have known. Aomame first and then Tengo seem to recognize that they must meet in the present before either can escape back to the "real world".

It's a multi-layered story which is at once a page turner and a story to contemplate.