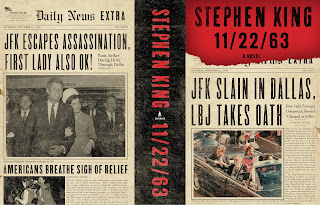 Maybe not great literature, but.... I admit I've never READ Stephen King before. I don't like ghost stories or scifi (in most cases) and I really don't like blood and gore so I've bypassed him, though I know (by reputation) he's a good storyteller. Loved the film of the Shawshank Redemption.
So I'm more than pleasantly surprised at this one. It's long (nearly 900 pages) but I'm listening to the audible version where the reader is very good, especially with the various regional accents--even manages the Kennedy accent pretty well. (I'd forgotten how completely regional accents have smoothed out since 1963--forgotten a lot of things about that period that King revives in this book.) I've spent HOURS this week listening pretty compulsively as I knit (finishing a boring project) or spin (once you get going it's pretty routine--plenty of attention left over for something else).

Definitely NOT a rehash of the assassination or the conspiracy theories--and in fact what there is of that is the least interesting part of the book.

Some blood and gore--though NOT Kennedy's.

The locales of the story are very well done: Maine where the main character comes from and a small Texas town where he ends up in particular.

The plot is the thing here. King is very very good at that--maybe even reminds me of Dickens in that regard--there's a similar sentimental ethos as well as a dependence on detail which echoes through the novel. There's a love story--and a pretty good one. There's a self-effacing, self-analyzing narrator/main character who's appealing and great with the hints not only of what's to come but about details that will recur.

The mechanics of time travel--not the scientific possibility thereof which King wisely doesn't tackle, but the practical rules--are well thought out and connect well with the plot and the themes of the novel. King is different from many time travel writers in tackling the issue of changing the past head on rather than avoiding it if at all possible. In Jake/George's world a trip to the past does allow you to change things--though as he says "the past doesn't like to be changed", but if you go back and come again there's a complete reset--everything goes back to the way it was. Not sure how that works as a theory of real possibilities, but it works very effectively in the novel.

I admit there are a couple of reasons I may be more addicted to this novel than you will be.
1. I LOVE time travel stories.
2. I was not only alive but an adult (in the first year of grad school) in 1963 and not surprisingly Nov 22 1963 left a huge impression.

The Spy Who Came in from the Cold by John LeCarré 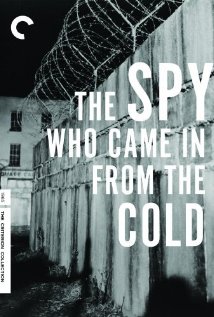 I reread this in March 2012 and still liked it a lot, but read it this time as a study for Tinker Tailor Soldier Spy. In this one the spy is a British one in the East German hierarchy instead of a Soviet one in the British hierarchy. Alec Leamas, British spymaster in Berlin loses an agent who's supposed to be crossing the wall to safety after years of providing good information to the British. That makes Alec less valuable in Berlin so he's recalled to a London desk job--one he's too much of a "field agent" and too independent to find tolerable. And the spymasters in London cook up an undercover job for him. He's to affect disaffection with the Service and go to seed, making himself vulnerable to recruitment by the other side, in order to get rid of a particularly nasty East German intelligence agent. Only he doesn't get all the information he needs. Neither does the naive British Communist girl who befriends him--and who becomes his lover--in the menial job he gets when he leaves the Service.
He is duly recruited as a defector, promised money, and meets his contact in Holland to spill the beans. But his contact soon lures him into the East where the contact is accused of treachery and Leamus finally realizes his real role in the mission. And when the girl turns up--having been "given a trip east a reward" by her local Communist party--Leamus.

LeCarre's message is that human treachery is human treachery whether out of personal cussedness or in the name of the State. And one side is no better than the other. Leamas, about as far away from an idealistic character as one can imagine, rebels.

George Smiley is a more important character in this one than I remembered and not as likable as he becomes later. He's clearly the brains behind the London plot. (Very interesting in these early novels by LeCarre to see how Smiley must have grown on his creator.)


Now I've got to watch the film again--I love Richard Burton in the part. Couldn't resist uploading the movie cover, not the book cover.

I was surprised to find this book on a list of the "best" spy novels, but not when I read it. It's not only a good one but it's different. 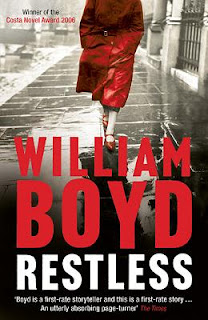 A woman tutoring foreign students in English while she half-heartedly completes a dissertation in history visits her mother in a picturesque village a short drive away. Her mother is a widow, in reasonable good health and in possession of her faculties. But Sally (the mother) has decided it's time to tell Ruth (the daughter) the truth about her life. She's really Russian (well, she had an English mother)--left with family after the Revolution, ended up in Paris by way of Shanghai--where the family exists as "stateless persons".  She's persuaded by a dashing British spy to work for him in return for British citizenship etc.
The chapters alternate between Sal's memoir of her life as a spy and Ruth's life in the present. The two converge as Sal urges Ruth to help her track down the suave British spy who seems to have tried to kill off everyone who worked for him during the war. Sal alone escaped.