In Sunlight and in Shadow by Mark Helprin 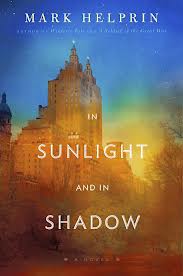 I read this one because it sounded to me a bit like his Winter's Tale, the only other Helprin novel I've read and which I became completely immersed in and loved. Like Winter's Tale, this novel celebrates New York City, this time at a somewhat later period. The time is 1946 and the main character, Harry Copeland, is a well-to-do Jewish ex-soldier who's come home to run his father's leather goods business, his father having died while he was at war. (I couldn't help but note that  Swede Levov, Roth's main character in American Pastorale, was also a business man in leather goods.) Harry, now in his early 30ies,  had been in the special forces  and fought his way from Africa to Sicily and eventually to the Normandy invasion, undertaking hazardous missions alone or with an elite team, been seriously wounded and had not exactly expected to survive. In 1942 in NY, he had two significant problems: his want of someone to love and be loved by and the need to save his father's business from the "protection rackets" which were largely unchecked by police or government in the city. And those two are related in ways that define who Harry Copeland is and how he will live his life.

Visiting an aunt (his only relative and she not a blood relative) on Staten Island, he sees a woman on the ferry and falls in love with her before he even meets her. Their love story is the at the core of the novel and Helprin writes some downright purple prose in its praise, verging sometimes on sentimentality, but for me right on the edge with the focus of the horrendous need of human beings to love, especially after living through the nightmare of the century. The woman is Catherine, only daughter of a rich financier, engaged to marry the son of another rich financier; a recent graduate of Bryn Mawr she has been trained as a singer  and is in a promising Broadway show. She too was stuck by seeing Harry on the ferry.

Harry's business is threatened with ruinous protection payments, orders of magnitude higher than those his father had been paying or any other tenants of the same building are currently paying, enough to ruin the business within the year. There is no hope of help from authority. The mob rules in this kind of thing. But Harry's sense of honor and dignity and what he owes to his father's memory cannot just close the business down and leave, and eventually it becomes clear that the mob is taking orders from the ex-fiance who has also bribed the critics to ignore Catherine's talent and imply that her rich father bought her a Broadway debut.

Love and honor denominate this novel and speak loudly to a generation that's learned to accept that neither is really possible in a world where return on investment trumps all. I recommend it highly. It's a moving story, a page turner and a tear jerker, but nonetheless honest.

I rate it a 10 though I doubt the critics do. I think it might be time to read other Helprin novels since these this one and Winter's Tale have captivated me so completely. And if you're in love with New York, this one isn't to be missed. I'm not--London is the city I dream about--but I still respond to Helprin's obvious love.

The Worst Hard Time: The Untold Story of Those who Survived the Great American Dust Bowl by Tim Egan 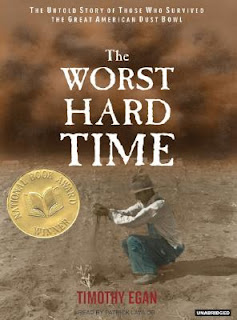 I enjoyed this book, another of the narrative histories so popular these days, books that appeal to real people because the author finds real people from the past whose lives were affected, even defined, by the events in question.

Egan describes the effects of drought on the areas of the high plains (mostly OK, TX and AR) where formerly prairie grasses had flourished and where the buffalo roamed. He begins with the XIT ranch, a huge ranch located in the TX Panhandle and NM, which broke up at the end of the 19th century when cattle prices tanked. Source of many Texas cowboy stories, there's a history of the XIT called 6000 Miles of Fence (http://www.youtube.com/watch?v=MSGJIfDwP2U)

The US actively promoted these dry lands--that of the XIT and beyond--and encouraged farmers to homestead there, even recruited immigrants to  settle the land and grow wheat. since in the years before and during WWI the US was exporting wheat all over the world and farmers were making lots of money that way.

But the worst combination of disasters awaited those settlers: wheat prices tanked right after production in this area came online. a serious drought season began simultaneously, the stock market crash of 1929 ushered in 10 years of Depression. Removing the native grasses from the soil which was necessary in order to plant wheat and other crops, proved disastrous when the new crops failed and resulted in seasons of horrendous dust storms that snuffed out life everywhere in the area and in a few instances caused dust to rain over the entire eastern half of the US.

Egan presents the details of these disasters through the eyes of people who survived, some of whom he interviewed personally, some whose descendants he interviewed and others he explored through their published or unpublished diaries and memoirs. Interspersed among these personal stories was Egan's own research into the period: statistics about immigration to and from the area, crop successes and failures, weather and politics--FDR's New Deal targeted this area first as a haven for settlers and then, as disaster set in, as an area of experimentation with conservation (replanting grass, building tree barriers, rotating crops and husbanding the soil). Some of these projects were successful; other not. And the results were seen in human terms by Egan's informants living and dead: conservation success, lessons learned, but also human skepticism and greed.

A quick read and even if you think you understand the dust bowl, you'll discover that more people stayed than left (as The Grapes of Wrath taught us) and that the effects of the irresponsible use of the soil which directly caused the dust storms were far more disastrous than you thought. At least that was my experience. Rated this one a 9 (out of 10). Only problem with the book is that the combination of factual history and personal story was not quite as well integrated as it is in many of these popular histories.