Thomas Jefferson: The Art of Power by Jon Meacham 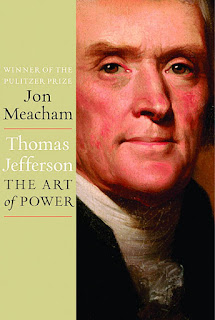 Excellent book. Meacham sees Jefferson not only as the idealist and philosopher who wrote the Declaration of Independence, but as a man who learned from experience and compromised throughout his political career. In fact, at the beginning of his Presidency, the Federalists were frightened that the country fail because real democracy was too dangerous and at the end of his Presidency some of the Republicans were angry that he'd compromised with the Federalists to the extend that he compromised the who idea of democracy. Interestingly, there was talk of secession at both points, and in both instances the North was seen as leaving the union, perhaps to form a country with British possessions in North America (Canada) and to have a more "royalist" government, maybe even go back to British rule.
One of Jefferson's greatest fears was that the new United States would give up the democratic ideal and have a "president for life" or even a younger son of the British king as its king.

His relationship with John Adams was also interesting. The two were close when they were both abroad as diplomats but politics separated them as Adams became the head of the Federalist Party and Jefferson of the Republicans. Only in old age did they reconcile (as a result of a push by Abigail Adams) and carry on a correspondence after Jefferson had retired. Then, they both died on the 4th of July of 1826, Jefferson have struggled to stay alive until July 4th.

Interesting to me that I've always liked Jefferson and felt closer to his main ideas but never read very much about him. Lately though I've read biographies of Adams, Hamilton (Jefferson's Nemesis) and Washington so have understand the Federalist POV much better, but reading this book reminded me that Jefferson, IMHO, is the closest to the way I think.

The book was interesting on the Jefferson controversy (slavery--he didn't free his slaves at death as did Washington, Sally Hemmings--Jefferson promised his wife not to remarry/sleeping with a slave, who was in fact a half sister of his wife, was not unusual at the time).

I was also reminded that it was Jefferson who commissioned the Voyage of Discovery of Lewis and Clark and who made the purchase of the Louisiana Territory on his own without consulting Congress (thought he at first wanted a constitutional amendment to allow it). It would probably not have happened had he not acted quickly. Those two acts set the scene for American expansion into the west and were therefore far-seeing and critical decisions.