Consider the Fork by Bee Wilson 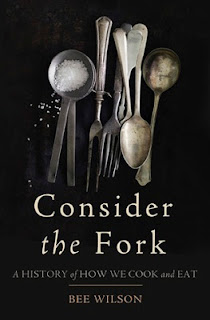 This was a joy to read. The author has a light-hearted voice and an arbitrary but unfailingly appropriate sense of organization. She surveys, not what humans eat, but the technology used to prepare food. Her main focus is on how it's done in the home, but she also explains those old kitchens with warm hearth and the hanging pots as where the servants sweated (sometimes naked) to produce the meals their betters ate. She segways into restaurant cooking now and then too, particularly as it influences the home cook. Her organization is tool-oriented: spoons, forks, knives, pans, heat sources, freezing, not forgetting peelers and whisks and Cuisinarts, even Sous Vide machines and Aeropress espresso makers.

On the way she touches on a wide variety of topics, mixing historical research, expert opinion and her own feelings on a wide variety of topics, all without ever losing the focus on food technology. I was entertained as well as informed. Nothing stuffy or academic here. She's British, by the way, and that informs her opinions but not too much. She's very knowledgeable about US food tools and habits too, and jumps around Europe with her examples, with France and then Italy coming next, though there are also sections on people who don't use spoons and forks—on chop sticks and on eating with one's fingers for example.
She's quite good on the current rage for the perfect kitchen, with space and provision for every possible tool. She hates islands. She also points out that kitchens usually contain features and tools from a wide variety times, historically as well as within one's own life, which is part of her objection to the "kitchen renovation" concept. I think she thinks one should "collect" one's kitchen over the years. (She thinks reproduction anything is silly. To recreate a room from the 1940s you don't just fill it full of everything made in the 1940ies....)

She's interesting on futuristic kitchens from the past too: a 1940s kitchen designed to excite American women to put up with the last years of the war (she very gently suggests American women weren't all that deprived by the war). And the Frankfurt kitchen designed by a woman not taken seriously because she was a communist (http://www.moma.org/interactives/exhibitions/2010/counter_space/the_frankfurt_kitchen), but which was actually very good. And the model kitchen of the Nixon-Khrushchev "kitchen debate".

I highly recommend this one.