Churchill: The Last Lion Volume III Defender of the Realm 1940-1965 by William Manchester and Paul Reid 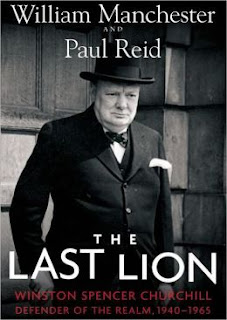 I read the first two volumes years ago and was awaiting the third, but as Manchester got older and older I was afraid he would never finish it. Evidently he was afraid too and finally enlisted journalist Paul Reid to finish it. Manchester had done most of the research. The book finally came out last fall.

Manchester is, in my opinion, one of the best writers on contemporary history, well history written for the general public at least, though his books are wide ranging including a biog of Mencken and The  World Lit Only By Fire (about the Middle Ages). His memoir of the Pacific War, Goodbye, Darkness, is excellent. I'll never forget  his saying at the end that he and his fellow soldiers welcomed the atomic bomb as a savior because they assumed their next task was the invasion of Japan which they assumed would be more deadly than the invasion of Normandy. He wrote a biography of MacArthur which I haven't read and a history of the US from 1932 to 1972 called The Glory and the Dream and of course The Death of a President which I've recently discovered is out of print which seems wrong somehow. That one I haven't read but do, luckily, have a copy. You might remember also The Arms of Krupp which made a big splash when it was published.  Haven't read that either.

Obviously much of Manchester's  oeuvre  is focused on WWII, but he writes primarily about people, rather than events, and his genius is getting into the skins of the people he writes about and bringing to the reader the details that make the people real and the events understandable in human terms. In the first Churchill volume his treatment of Churchill's childhood was extensive with its focus on his playing with wooden soldiers and striving for the attention of his parents (which he rarely got) as well as the love and care he got from his nanny who gave him what the parents did not. Childhood takes up a good portion of that book. No other biographer that I've read does more than narrate the bare facts of Churchill's childhood. But obviously childhood is critical to understanding the man who was literally written off by his parents as dumb and unpromising.

But to this final volume. In 1940, Churchill became the war leader. [Read Lukacs' June 1940 for a detailed account of how that happened.] Churchill had served in WWI (and in The Boer War), in the field but also at the Admiralty, but he was best known for the disastrous events at Gallipoli which he championed but was not really responsible for the execution of. After the war and throughout the 30ies, he was seen as a warmonger, especially as the rise of Hitler caused him to champion the need for Britain to rearm. He continue to serve in Parliament (to which he was first elected during the reign of Victoria.  In June of 1940, he was already 65 years old.

I listened to this book on tape and either the reader was good at doing Churchill's voice or they used actual recordings of Churchill (unlikely) and a marvelous portion of the book is Churchill's own words which, during the war, inspired the Brits to endure and resist in the face of what looked like a complete takeover of Europe by Hitler. Shortly after Churchill became PM, he presided over the the marvelous evacuation of soldiers (not only Brits but some Poles and French) from Dunkirk after which he reminded the people that in spite of the success a retreat is not a victory. Then France collapsed and the whole world expected Britain to go pretty quickly. That was the time of the "We will fight them on the beaches...." speech.

I'm not going to tell the whole story. You know it but will love reading it again, sprinkled with Churchill's rhetoric. He was fearless. There's nothing else to be said. Though he knew the odds, he was determined and passed his determination to a whole people. You remember the "finest hour" speech  where he said we will resist in the face of huge odds so that if the British Empire last for a thousand years (as Hitler expected his empire to last) all will say, "this was their finest hour."

Churchill traveled the world, uncomfortably in unheated, unpressurized Liberators to meet with his generals and allies. Roosevelt traveled to the big conferences (granted it was harder to him to travel and he sent Eleanor to rally the people at home and in the field) but that's all. Churchill traveled far and wide, often ill with pneumonia or heart problems. Stalin barely left his domain (afraid probably). Tehran was as far as he would go to meet with the allies though Churchill traveled twice to Moscow. Yalta was in Stalin's own territory. Other top level allied meetings were Churchill and Roosevelt only.

Gradually Churchill realized that he was becoming the junior partner in the alliance, though he was older than both Stalin and Roosevelt (and outlived both). As allied victory became inevitable (long before the war was won), it also became clear that the US and the USSR would eclipse Britain in the post-war world. Roosevelt particularly wanted to rid the world of colonialism and had no sympathy for the old Victorian's goal of holding on to as much of the empire as possible. In retrospect, Roosevelt seems naive, as he was naive in thinking he could work well with Uncle Joe. Interestingly, this is a tale of war from the British POV and neither Roosevelt nor Eisenhower come off as well as they do in American versions.

The war (1940-1945) takes up more than three quarters of this book which extends until Churchill's death in 1965. In 1945 Labour wins the election and Churchill leaves the Potsdam Conference, though his influence continued to be felt. You'll remember his famous speech in Fulton, Missouri (to which Truman had invited him to speak at the Commencement ceremonies of Westminster College) he warned that "From Stettin in the Baltic to Trieste in the Adriatic, an iron curtain has descended across the Continent."

I can't compare this volume easily with the others since I read them years ago, but I enjoyed it. The words may not all have been Manchester's, but he did the research and the focus is his. Thanks goodness for Paul Reid for this final chapter in the story.