The Nuremberg Trial by Ann Tusa and John Tusa 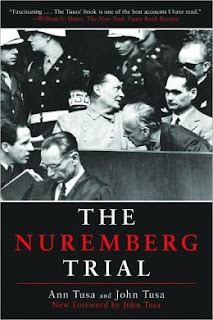 Published in the 80ies, with access to huge archives which included films of the proceedings, this may be the best general interest book on the subject. Not sure. I've only read one other and this was much better. The Tusas are British, he a Czech immigrant who became a BBC news reporter. At first I was a bit put off with the Britishisms (like the "curate's egg") but also because they criticized the American prosecutors and lauded the British...but after awhile I decided they were right. The book is long and detailed and attempts to understand the people involved, the 22 defendants (including Martin Bormann who was never found and presumed dead)  the prosecutors from the US, Britain, France and USSR, the defense attorneys, the witnesses, the judges from the four powers, as well as many others--the jailers, the doctors and psychiatrists, the military officers and men, etc., altogether an enormous cast of characters. And don't forget the press. Inevitably I was having to look up who even major players were and many just faded into other defendants, or other prosecutors, or other judges.

The US organized the effort and paid for all the facilities, including building a courtroom in the former Nazi Palace of Justice, at a time when building materials were hard to even find in a severely bombed out city. The physical and procedural details were as interesting as the people. Early on there were "Ashcan" and "Dustbin" the two prisons for potential defendants  one of which was in Luxembourg in a former luxury hotel which lead to  news stories about ex-Nazis living in the lap of luxury until the head of the prison organized a visit for the press.  IBM provided the first version of the simultaneous translation system now so critical to the UN and other organizations. A document center wrestled with the HUGE amount of documentary evidence, authenticating documents and getting them copied (photostats I think, there not being other copy technologies available) and distributed, in the correct language (English, French, German, Russian) to often huge numbers of participants.

Because the Germans documented everything and because the Allies captured records on a huge scale, the documents were the main evidence in the trial, witnesses accounting for relatively little impact. There were many legal and philosophical issues to deal with: law procedures that were similar in the US and Britain, but different on the continent. The US wanted to convict the whole gang on "conspiracy to conduct aggressive war" but conspiracy was not a usual charge in the other countries. Each country had pet issues they wanted to prosecute specifically, as did the occupied countries who were not directly represented. Russia wanted to prosecute the Nazis for the Katyn Forest massacre, even as most in the West were pretty sure the Russians had done it themselves. 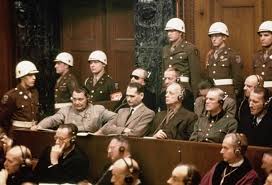 There were personality clashes. Some lawyers and judges were more interested in developing international laws and precedents—in other words, theory, while others were better at practical matters, say, cross examining the witnesses. The Americans were preoccupied with theory while the British were better prosecutors—in general.  The trial lasted from November 1945 to the end of September 1946. The hangings took place in October (can't remember date; the book could have used a reference timetable). They all lived in nearby makeshift accommodations. They socialized together and lived in a world separate from the bombed out city. Even in long recesses, few could go home. The Americans did not usually travel home though occasionally wives came over. Travel was difficult on the continent so mostly only the Brits got much time at home.

One issue, though, predominated. While Göring sneered that whatever conclusions came out, it would be just "victor's justice", in fact, most agree now that it was a legitimate trial (no show trial). Three (Schacht, von Papen, and Fritsche) were acquitted altogether while five got prison sentences from 10 years to life. The rest were hanged—they even hanged Göring's body after he'd swallowed a cyanide capsule that even today no one is sure where he got. Many Germans were angry that they were not all hanged!