My Promised Land: The Tragedy and Triumph of Israel by Ari Shavit 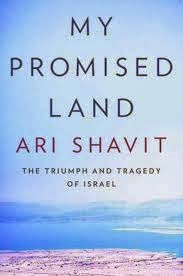 Excellent book. Heavy emotional overtones, but the author never promised a straight-forward history. I've been fascinated by Israel for a long time but lately been more and more critical. The Wall is horrifying ( we're building a wall--even here in Texas--to keep the Mexicans out, but I don't like that either and believe both will go the way of the Berlin Wall). Shavit calls Israel now a colonizing power in a age when colonialism's light has gone out.
The book begins with Shavit's Great Grandfather, a well-to-do English Jew, arrives in Palestine to "scope out" the land as a homeland for the Jews, for the Zionist movement. He and many others recognized that Jews were unwelcome in Europe and though he and many like him had done well in England, the only way to thrive going forward would be to assimilate as many Jews were doing all over Europe already. He foresaw that in a few generations they would intermarry and lose their Jewishness. A Jewish homeland was the answer. The problem was, the problem which started way back there in the 19th century, was that the visiting Jews did not "see" that the land was already occupied, any more than the Conquistadors did not "see" that Peru was already occupied.
It's a powerful image which Shavit comes back to again and again as he both celebrates what the Zionists made of Israel and recognizes that they will not survive unless they deal with the current problems. One is that huge numbers of residents don't contribute to the society. The ultra orthodox Jews who won't even serve in the military and maybe don't pay taxes either (I may be wrong about that). And the Arabs who are a subjugated people in their homeland but who with a different social and governmental structure, would have much to contribute.
What it seemed to me (perhaps naively) was that he seems to think (as any thinking person must) that Israel would work best if all its citizens were equal and contributed to the whole. No walls. No occupied and occupier classes. But at the same time, he can't quite give up the "Jewish state" idea, even as he recognizes that Arabs will outnumber Jews in a few years. I've always thought there was no hope for a two-state solution but one state without walls is another story. Not that Israeli political elite are likely to go in that direction.... Shavit writes this book partly out of frustration because he too sees that.
The Zionists didn't explicitly see The Third Reich coming, but they did feel at a crossroads. And while WWII gave their dream a reality, that reality was not a well-thought-out plan and only because of the utter chaos in Europe at the end of WWII, with millions homeless, and no one ready to step in with the solution, did it become a solution for the displaced Jews of Europe, most of whom would rather have gone somewhere else more urban, more "civilized" had they only been welcome.
Well worth reading.

I wanted to thank you for this great read!! I definitely enjoying every little bit of it I have you bookmarked to check out new stuff you post....Cccam Server