Ravensbrűck: Life and Death in Hitler's Concentration Camp for Women by Sarah Helm

First published in 2014 in the UK where the title was If This is a Woman
First of all the UK title comes from Primo Levi’s book If This is a Man (often titled Survival In Auschwitz in the US: 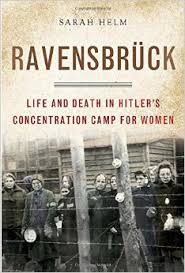 Consider if this is a woman
Without hair and without name
With no more strength to remember
Her eyes empty and he womb cold
Like a frog in winter.
Meditate that this came about:
I commend these words to you.

This is a remarkable book and not only because the author tells a part of the German concentration camp story that’s not generally know. I’ve read a lot about  WWII (not at all an expert mind you) and before reading this book knew only the name of the camp and that it was for women.

What’s most remarkable about this book is the characters that she manages to bring to life, the women who lived this nightmare primarily but also the women who were their guards and doctors, the SS men who ran Ravensbrűck and its satellite camps, and the various people and organizations who form part of its story: Himmler who planned and managed all the camps, and the Swede, Bernadotte, the only one who actually mobilized to save any of the millions in the camps. (The military, American, British and Soviet armies overran camps on their way to Berlin and certainly offered freedom and succor to the inhabitants, but there was no other effort to save those in the camps, even toward the end of the war when Hitler’s orders were to kill all the inhabitants of the camps, burn them down and plow them under before they could be captured by the enemy. Eisenhower said he could help those prisoners best by military defeat of Germany. His attitude was that of all the Allies.)
Many people don’t realize that prisoners in Hitler’s concentration camps had a “different status” from those in POW camps where generally men were not made slave laborers or starved or denied communication with the outside world (their relatives were notified they were POWs and they had a right to receive aid packages, etc.). There were no rules governing concentration camps…none except Hitler’s rules.

Ravensbrűck was unique among Hitler’s camps in that it was experimental, a camp for women, built in 1939 in Mecklenburg near the town of Furstenberg. If you have Google Earth search for Ravensbrűck Memorial and you’ll see the remains of the camp with even some of the barracks still standing. Near of beautiful lake—it was a vacation spot—east of Hamburg in what became East Germany. It was intended as something of a “model camp”.

The new camp had buildings like other camps: an Appellplatz (square where prisoners assembled for roll calls) a revier, or infirmary, and an Effectskammer or prisoner’s clothes store. (The latter held the belongings of those who died or were killed and was the only source of clothes for the living.) The camp had electrified fences (with enough power to kill a person trying to scale them) but no watchtowers or gun emplacements like the men’s camps. Flowers, red salvias, were planted alongside the first row of barracks. Some ex-prisoners were to hate the sight of red salvias in their afterlives….

The first 867 prisoners entered Ravensbrűck in May of 1939 (there would be several hundred thousand at the end of the war, many not even processed, as prisoners were moved hastily from places further east, many ill and starving or worn out from forced marches). They were divided into groups: asocials (prostitutes, beggers, lesbians, petty criminals, gypsies, mentally ill or retarded people, etc), political prisoners who were mostly Communists, and Jehovah’s Witnesses. Jews were divided into political and non-political. Political Jews were usually those arrested for Rassenschande (polluting the race by having relations with non-Jews).

There were many Germans in the prison who were not Jews, a fact which is sometimes ignored, but all the categories Hitler wanted out of Germany were there as well in later years as women who citizen Hitler or the regime. Among the foreigners, the different groups tended to stay together. Among the most close-knit were the Russians, many of whom were actually in the Red Army as nurses, doctors, even foot soldiers. The closeness of the Russian group and the wisdom of their leader gained them some points in negotiating with their captors. The Poles were the next largest group, but there were also many Austrians, Czechs and others. When the American army was poised to take Paris, the Gestapo transported all its prisoners east, the women to Ravensbrűck. Most were arrested for working with the Resistance, but there were some SOE women from the UK and at least one American who had helped get stranded pilots out of Framce/

The book opens with Johanna Langefeld inspecting the site. Langefeld is the first of many women Helm brings to life. An experienced prison guard, she was to be the Oberaufseherin  (head female guard).We see her as excited about an experimental project at first. Then we see her later through the prisoner’s eyes, not exactly a nourishing type of person but generally decent. Later we see her when she’s transferred to Auschwitz and is unable to tolerate the degree of cruelty. Then we see her back at Ravensbrűck only to find much of what she hated at Auschwitz. Finally we see her on trial and in 1957 we see her knocking on the door or an ex-prisoner trying to explain herself.

I would guess that maybe 10 or 12 were characterized in some detail and followed through their lives, including before and after the camp. Though there were not an after for many. 50 or 60 other woman are also presented so that we not only associate them with the part they played in the story of Ravensbrűck but as people, with pasts and in some cases futures, with likes and dislikes and problems, illnesses, talents and peculiarities. And friendships—there were a lot of friendships especially among women who were long-term prisoners, evidently considerably more than in men’s camps.

One case would be that of 15-year old Krysia Czyz . She was one of about 75 “rabbits” (kännchen is the German word; we’d call them guinea pigs), young and fit girls from Lublin in Poland who were singled out for possible medical experimentation by Dr. Karl Gebhardt. Of those actually experimented on, some died of the operations performed on them, other died later and still others, including Kysia, lived through many transports (when a prisoner was selected for transport it usually meant to be killed. At first they were sent away to mental hospitals elsewhere in Germany—where Hitler had arranged to experiment with gassing as a way of killing large numbers of people—but later they were sent to the “Youth Camp” adjoining Ravensbrűck where they might be starved to death, left to die because they were already ill, or shot. Eventually Ravensbrűck got its own gas chamber.)

The Polish prisoners were allowed to correspond with family, though the letters were severely censored. Krysia came up with a plan to write in urine between the lines of her letters home, telling her family what had been done to her and others and asking them to contact anyone they can in London (remember there was an interim Polish government in exile at the time). Krysia’s daughter was eventually able to give the author a copy of one of those letters.

I recommend this book highly. It is not a depressing read. Any book where bad things happen is much less likely to be “depressing” if you understand something of the individuals involved. That is this author’s genius, to dig in, which was not easy nearly 70 years after the end of the war, and give faces and characters to the people involved.