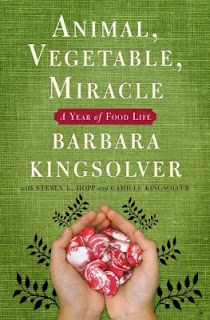 This book was the choice of my f2f book group meeting this week and also of my nonfiction group online. I’ve liked Kingsolver’s novels, but don’t think I’d necessarily have read this one, unless I’d been pushed, but it turned out to be a landmark reading experience for me.

Kingsolver, who grew up in and wrote about the land in Prodigal Summer (a novel I liked more than the critics), had lived in for years when the family decided to move permanently to the farm in which her husband had owned for a long time. They spent their first months working on the property, which they had used as a summer retreat for years, turning it into a working farm and renovating the farm house. Then they decided to live for a year eating only local food, much of which they'd raise themselves, and to write a book about it. I knew this was a serious experiment, not just a gimmick, when they began deciding what few non-local products they’d continue to buy. Olive oil was the primary one. Coffee was Stephen’s choice; spices were Barbara’s.

Kingsolver wrote most of the book, with sidebars and short essays by her husband who’s a biology professor and by her daughter who focused on recipes and the teenager's point of view. They started their experiment in March; the chapters focus loosely on the months of the year and the agricultural activities appropriate to it. In addition to a large family garden, they had plans to raise chickens (the project of younger daughter, Lily, who turned out to be quite an entrepreneur, selling free range eggs and natural chicken and hoping to use the money to buy a horse) and turkeys. The turkeys were Barbara’s project and their progress in some ways provides the “plot” of the book as she tried to start a breeding flock. This was a significant departure for the family which had been vegetarian before, in part to protest to the way animals are raised for food in the US—in feeding lots where they’re packed together in ghastly circumstances and plied with antibiotics and food intended to fatten them quickly.

One of the most interesting ideas Kingsolver explores is how they decided to become carnivorous again. Basically the “local food” concept trumped the veggie-only concept. Two major reasons were the high transportation cost of protein sources not produced locally (like tofu) and the fact that, in particular geographies and seasons, available local food IS animal. But, says Kingsolver, that doesn’t mean you have to support feeding lots.

Hopp explains the philosophy of industrial agriculture and documents its significant shortcomings: transportation costs of food in the are enormous with most of the profits going to middlemen not to farmers and growers. Secondly, the loss of biological diversity has been enormous: from hybrid seeds to genetically modified food to the fact that animals raised for food—including turkeys—are bred artificially and have few breeding/rearing instincts, our current food sources may not be able to survive alone in nature.

Kingsolver, who kept a detailed journal of their farming experiences, down to the pounds of tomatoes harvested each day, balances family experience (focusing primarily on their local food experiment) with ideas she’s been advocating and writing about for years (she started her career in science journalism; in Prodigal Summer there’s a character who’s breeding chestnut trees again to repopulate forests after disease killed all the chestnuts). There’s a vacation—where they visit a cheese maker and a dairy farm. There are holidays and family meals with menus. There’s advice for readers who are interested in farming, the organic movement, local sources of food, bread making and cheese making at home, etc.

Check out the website: www.animalvegetablemiracle.com. All the recipes are there.

Yesterday I went to the farmer's market and bought zucchini and eggplant for ratatouille (which turned out wonderful!) and mustard greens and arugla for the rabbits and organic coffee and free range eggs.