The Bully Pulpit: Theodore Roosevelt and William Howard Taft and the Golden Age of Journalism by Doris Kearns Goodwin 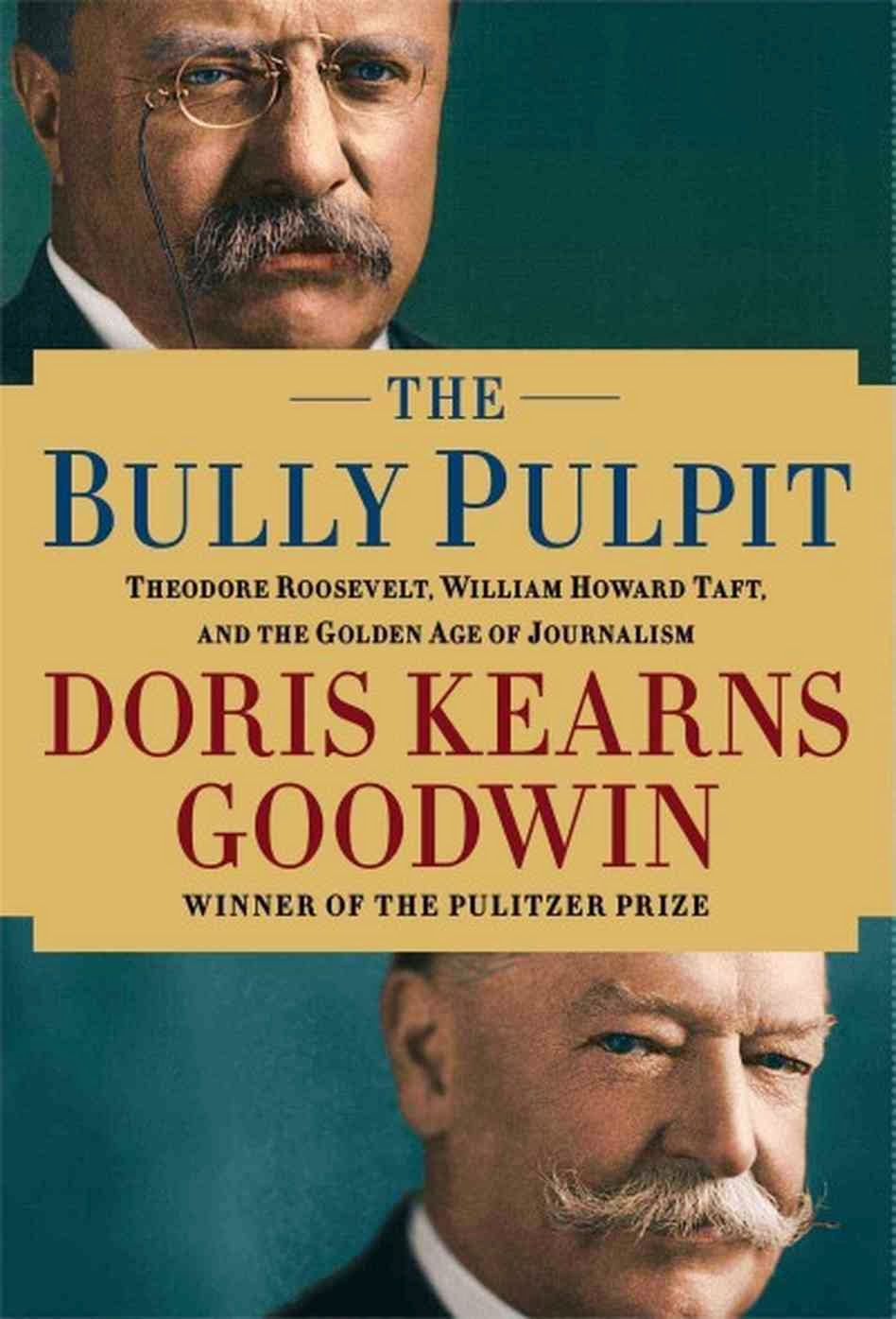 My only complaint about Doris Kearns Goodwin's new book, The Bully Pulpit: Theodore Roosevelt, William Howard Taft and the Golden Age of Journalism, is that it ends too soon. That's saying a lot for a 900 page book! But I'd have been happy for it to go on in great detail instead of wrapping up the lives of the major figures relatively quickly after the election of 1912

Goodwin has made a career about writing about American Presidents in the context of the people and ideas of their own time: FDR and Eleanor Roosevelt and the homefront in WWII, Lincoln and his “team of rivals” and now the earlier Roosevelt and William Howard Taft as well as S. S. McClure, his magazine and the journalists who would become known as the “muckrackers” (originally a perjorative term used by Roosevelt himself but later a badge of honor for the first and maybe the greatest investigative journalists: Ida Tarbell, Ray Stannard Baker, Lincoln Steffens and William Allen White).

I was completely engaged by this book which is not a full biography of either President, though at the beginning Goodwin reviews their early lives and that of their wives, but by the end—which is really when the two ex-Presidents made up their quarrel after the explosive and nasty presidential campaign of 1912 where Taft, the sitting President ran for the Republicans, the progressive Wilson (maybe the next President I want to read a bit about) ran for the Democrats, and Teddy Roosevelt ran for a new Progressive Party which he founded—I wanted more. The “bully pulpit” story was over but I'd have listened to more than a single chapter wrapping up the lives of all the characters. (Indeed a whole other book has been written about Roosevelt's trip to The River of Doubt in search of the source of the Amazon.)

The title is significant because Roosevelt was the President who first used his office as a pulpit to raise and “preach” about issues of fairness and concern for all citizens. And “bully” of course was his signature comment on anything he liked. He wanted to break the power of the party bosses and institute popular primaries in all states and to control the power of monopolies like Standard Oil which were controlling their own costs by deals which left small business and the general public at a distinct disadvantage. Enter Ida Tarbell, a remarkable woman, now remembered primarily for her exhaustive study of how Standard Oil controlled the railroads and of course the price of oil. Born in Pittsburgh, with a father who worked in the industry, she made it her life's work to investigate and write about how big corporations used their power and influence to disadvantage everyone else. She was a talented writer who could tackle any subject, including a biography of Napoleon which McClure wanted.
She and her colleagues became allies of Roosevelt, first as governor of New York and later as President as he worked to control the power of corporations, even at the considerable risk of alienating fellow Republicans.

The Republican Party was the source of “progressive-ism” (which I theorize got passed to the Democrats maybe about the time of Wilson who defeated both Roosevelt and Taft in 1912 with a pretty progressive platform).

Taft was a president I knew practically nothing about: he was so fat he wouldn’t fit into the White House bathtub and his son, Robert Taft, was a presidential contender when I was a child and first paid attention to politics. In reality, Taft, who grew up in Cincinnati, was a very interesting man, likeable, hardworking, effective, and congenial. He trained as a lawyer and was 100% dedicated to the law, including how to use the law to benefit the people and predatory corporations. He had a successful legal career, was appointed to the Federal Bench for his district and eventually came to Washington to work in the Attorney General's office. That's when he met and became very close friends with Theodore Roosevelt who had similar political beliefs and aspirations.

Taft was an exceedingly nice person probably too nice Goodwin and many others before her have concluded, to be President. And he never wanted to become President. He was smart and ambitious, but his goal was the Supreme Court, not the White House and in the end that's where he ended up as a very successful Chief Justice, after a rather unsuccessful presidency. And he quarreled seriously with Roosevelt, or rather Roosevelt quarreled with him. Taft was not a contentious person.

Roosevelt and Taft and SS McClure and the journalists on his magazine shared a set of common beliefs: the need to provide protection and benefits for all citizens, including the working people and the concomitant need to control corporations on behalf of all the people. Goodwin tells their story brilliantly. The book is a biography of all seven, the two presidents and McClure and his four main investigative journalists, how they worked for each other and sometimes against each other, how the journalists communicated with and aided the President on significant issues that paved the way for important legislation in their own time and later: lowering tariffs, controlling corporations, instituting an income tax and eventually providing what we call today a safety net for all citizens.


It's a timely subject with the Republican party, at least its progressive wing, supporting many of the issues we associate with the Democratic party today and with the progressive Republicans working against their conservative wing, even to the extent of splitting the party and creating a third party. Had it been anyone other than Teddy Roosevelt who was not really interested in a party per se but in getting elected so he could continue his work, that third party might have been successful. It was joined by many of those who felt disaffected by the current establishment, including among others those agitating for women's sufferage.... But Roosevelt was virtually out of control and though his causes were worthy ones and he attracted many followers, he was, in this compaign, mostly bombast and rhetoric (his slogan was “We stand at Armageddon, and we battle for the Lord.”) He did nothing but use the “bully pulpit” and when he failed, the party did. But that's another story....

Hi Susan,
Have you read "The Imperial Cruise" it's an interesting take on how TRs policies laid the foundation for the war in the pacific.