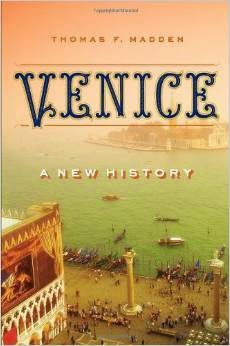 Picked this up on a whim and was initially bored: too many dates, not enough people. But I really got into it. The author argues that Venice was not the oligarchy most have assumed because there were no hereditary rulers but an elected Doge whose sons could not inherit his position. Elections were carried out by an elaborate series of committees working one after another, organized in such a way that no one person could either dominate or or form a clique to so. Furthermore there were multiple ways in which common people could work themselves into the governing bodies so Venice was not just a rich man's empire. And there was no nobility.

Venice, which during much of its existence  was an empire including much territory in what is now northern Italy, land across the Adriatic, islands like Crete, even Constantinople at one point, was primarily a business and made decisions deliberately and with both eyes to the future. Venice's business was ship building and trading, mostly around the Med. But you remember Marco Polo? He was the younger son of a wealthy Venetian merchant to traveled to China and later when he languished in jail during one of the wars with Genoa, he wrote about it.

Venetians were sailors and businessmen who governed themselves without a King or Sultan and whose government lasted longer than Rome. It was Napoleon who shut it down in the name of the ideals of the French Revolution and demanded it release all its political prisoners (there were now).

This is a very upbeat history  (biog.)  of an empire and a city and it ends with a plea for preservation (and hopes for fewer tourists and cruise ships). I'm no specialist in the history of this region, but I enjoyed the book enormously.