People of the Book by Geraldine Brooks 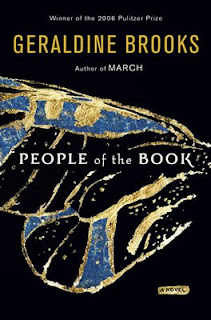 Hannah, an Australian specialist in preserving old manuscripts is invited to in 1996 to advise on an old Jewish manuscript with Christian-like illustrations which had been preserved by Muslims. The manuscript was seen as a symbol of collaboration and good relationships among the "people of the book". The novel not only tells Hanna's story but imagines a history for the manuscript itself, "explaining" every mystery she encounters with a human situations from the past.

I was nevertheless somewhat disappointed by this book. Brooks did a whale of a job of research so that, though the book is fiction, all of the periods of history in the past of the Sarajevo Haggadah were recreated in authentic and believable detail. But there’s more to fiction than research and believable historical detail and I felt that Brooks sacrificed human truths in favor of historical truths. Hannah’s story is complex, but somehow bloodless. I understood what happened to her, but didn’t feel it. The many many historical contributors to the manuscript were also believable, but most existed only in one dimension, in one chapter of the book. Characters rarely “live” with that little exposure.

With the Old Breed at Peleliu and Okinawa by E. B. Sledge

This is a great memoir if you want to understand what it was like to fight in the Pacific in WWII. It affected me very much as my reading of Norman Mailer’s The Naked and the Dead did when I first read that. I could feel the pain—the dirt or worse yet on Peleliu the coral one couldn’t dig into—the bad food and dirty water, dirty and wet clothes, the fear. It’s painful to read, though, and if you won’t want to know the gory details faced by young men barely out of school and inexperienced with the world, then you don’t want to read this book.

I hate war, but I feel compelled to know what it’s like so I don’t take for granted what we asked young people to experience in war. Eugene Sledge (who became Sledgehammer to his buddies) had had one year of college when he joined up—as did most of his generation (few in fact staying to finish college which is one reason why we needed the GI Bill). He joined the Marines (the “old breed” of the title).

This book is different from other memoirs because of the detail. It’s not brilliantly written or “literary”. That’s its genius says Paul Fussell who reviewed it for a 1990 edition (Fussell has written about both WWI and WWII and was a soldier in the Pacific himself). Sledge explains how comradeship worked with soldiers to form lifelong bonds. He talks about officers they admired and those they hated and feared. He details the hardships and how hatred of the Japanese developed and hardened even the most sensitive among them. He explains how everything worked or happened, from the human waste in foxholes they couldn’t leave, to stripping a Japanese corpse for souvenirs, to descriptions of wounds and dead Americans lying covered up on the battlefield until they could be retrieved, to water that was dirty because those in the rear had put it in insufficiently cleaned oil drums, to how the mortar he used worked and the problems placing it in the muddy ground of Okinawa. He explains how ammunition was delivered (or not in some cases) which the movies never show. He explains how everyone was afraid and how some handled it differently from others. He explains how Japanese soldiers who spoke English tried to move in on their foxholes at night and how occasionally a buddy was mistakenly shot for an enemy.

Sledge never romanticizes war. The only good was the friendship and interdependency men developed, but he doesn’t romanticize that either.

China Road: A Journey into the Future of a Rising Power by Rob Gifford 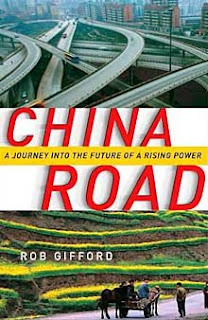 Rob Gifford has a degree in Asian Studies and speaks Chinese. He lived in for years, most recently as NPR Asian correspondent. When he was planning to leave China to work for a London-based post with NPR, he decided to take a road trip along the main highway going West from Shanghai to Kazakhstan—highway 312—and to write a book based on his experiences.

Like most memoirs of the road, Gifford’s book meanders from the road to broader experiences with and the Chinese people. He takes the “old road” as the truckers do, the latter to avoid high tolls on China’s newest highways while Gifford wants to talk to as many Chinese people in as many places and situations as possible. He visits with truckers, taxi drivers, farmers, factory workers—people he meets in cafes and on the street. One conversation, on a bus, with a doctor who performed forced abortion, was especially interesting. The woman felt she was being patriotic to force abortions and even destroy late term fetuses born alive. She had no doubts.

Gifford also talks about the lack of firm morality in today. He says for years the Chinese have lived by Marxist/Maoist standards and as that erodes, nothing has yet taken its place—and most Chinese have no strong religious affiliation. The result is capitalism unbound, at least among the urban and relatively educated. I find that analysis disturbing, with its assumption that it’s religion that keeps societies moral…. Must think about that. But clearly there’s been a loosening of the moral standards associated with Chinese Communism—though not in all cases. Gifford attributes the recent scandals with tainted food supplies to that rampant capitalism. Would like to hear his opinion on the recent move of the Chinese government to take partial responsibility for the tainted milk scandal.

Toward the end of his journey he travels the northern route of the old , pretty much the same route as Peter Fleming described in News from Tartary in the 1930s. He also covers the territory of Peter Hopkirk’s book, Foreign Devils on the Silk Road, which deals with the Westerns explorers and archeologists who discovered (and then appropriated) ancient manuscripts and artifacts preserved in caves near Dunwang in what used to be called Chinese Turkestan and is now Xinjiang Uyghur Autonomous Region.

After Dark by Haruki Murakami

It begins with an encounter in Denny’s (Murakami is fascinated with American pop culture) between two college students, a girl who’s quietly reading in order to avoid going home and a guy who’s off to practice with the band where he plans trombone—in a old warehouse they can use only at night. They begin talking about chicken salad—his favorite at Denny’s. She’s skeptical—chickens are abused and full of hormones; he’s surprised at her health concerns since she’s smoking. These two—Mari and Takahashi--are the focus of the narrator’s commentary at different times during the night, basically between midnight and dawn in .

We learn that Mari is studying Chinese, has a scholarship to study in China, and that her beautiful sister—with whom she’s been compared unfavorably all her life—has been sleeping for weeks, apparently healthy but avoiding the world. Takahashi loves music, but has decided to concentrate seriously on his law studies so that he can get a pretty good job at a pretty good company and live in a pretty good house with a pretty good family in a—well you get the idea. They encounter each other and talk several times during the night, getting to know one another and relating to each other with increasing authenticity.

In the meantime we encounter a Chinese prostitute who’s been raped and beaten in the Alphaville “love hotel”, and the seemingly respectable computer expert (who lives in a pretty good neighborhood with a pretty good family) who’s responsible, and we meet those who work at Alphaville at night.