The Red and the Black by Stendhal 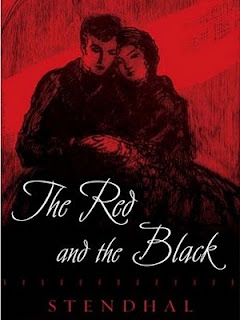 I read a Kindle version which seemed a very old translation. I have a Modern Library Edition, also old and an audible.com version. All are different. Wonder which is better. I read this once many years ago, but didn't remember much more than the main character's name.

The Red and the Black is often considered the 'first' realistic novel because it focuses on a person of the "people" rather than the aristocracy and because it attempts psychological understanding of the characters. A poor young man of superior intelligence attempts to make his way in a sophisticated world but is ultimately betrayed by his own passions. It reminds me of Dreiser's An American Tragedy in many respects--often classified as "naturalistic" (extremely realistic) in American literature, but was written nearly a century before--1830 versus 1925.

It's also politically interesting--though I'm sure I miss many details since I'm not versed in French history. The aristocrats are once again on top (the Bourbon restoration period is the setting) but they seem relatively weak and vulnerable--at least from the inside--and are always worrying about what will happen to them when the lower classes rise again. Julien Sorel, the brilliant son of a carpenter who hates him because he's physically weak and unable to contribute to the family business like his brothers, gets his education from the clergy (his only outlet) and becomes a tutor in the home of the town's mayor. The mayor hires him primarily as a social status symbol. But his "betters" also feel threatened by Julien who strikes them as just the sort of leader likely to bring about the next revolution. Julien, for his part, idolizes Napoleon.

Eventually Julien goes to Paris to become a secretary to a rich aristocrat, the Marquis de la Mole. He falls in love with the Marquis' daughter--as he fell in love with the mayor's wife--and those love affairs are his undoing. Neither is very believable psychologically, but the focus was specifically on the character's psychology which was revolutionary at the time.