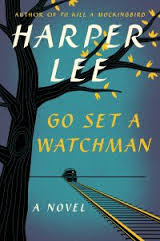 I finished Go Set a Watchman and it's a much better book than I anticipated. The early chapters were boring because they cataloged life in a small town in the South in the 50ies. All except the racial stuff would characterized the small town in Iowa where I grew up in the 50ies. I'm younger than Lee, was still a child growing up in the 50ies. I found that world ideal for a child but as I grew up I knew I didn't want to play a female role in that sort of world. Clearly Jean Louise had similar feelings.But the conflict arises when she see her father in a meeting of a Citizen's Committee which had pretty racist intentions. But it's not just that Atticus was a racist. I thought maybe he was really a different character in this book when I heard of many reader's disillusionment reading it. But that is not the case. Atticus is the same person. He's just seen in a more realistic light in this book. To Kill a Mockingbird is a fable and a lovely one and obviously it's spoken to generations of Americans, but it is a fable where the important issues are highlighted and grim reality is held off. Good and bad stand out clearly. But childhood must end, and the acceptance of Boo Radley represents a kind of growing up for the children, or at least a step on the way.But Go Get a Watchman is a different kettle of fish. It becomes an ugly clash of generations. Jean Louise thinks she's following her father's lead in absolutely turning her back on the South's persistent racism. So when Atticus seems to be as racist as the rest of them, she is horrified, gets physically sick after sneaking into the balcony to watch the meeting. When she confronted her father she was hysterical and nasty, feeling like her whole upbringing had been a lie, the basis of her life undermined, her father who seemed so good, now irretrievably evil. It was her uncle, the doctor/scholar brother of Atticus, who takes her in hand. His arguments are, in part, that a leading lawyer in town has to participate because part of his role is to moderate, to lead in the town but actually to be a voice for moderation in racial situations which could quickly get doctrinaire and dangerous. But his basic argument is that Jean Louise has to "grow up" and stop idolizing her father. For most children that process happens slowly and uneventfully. For Jean Louise, she's already 26 and realization is devastating. I thought it was handled very well actually but for that reason, I too think the book is likely a fictional autobiography.You can argue till the cows come home whether moving slowly on racial justice in the South was better than being dragged kicking and screaming into actual equality of the races (which of course as we see now has still not really happened). I don't think that's the main point of the book. The main point was the very painful jerk Jean Louise got when she finally recognized her father as just another fallible human being.