The Cold War: A New History by John Lewis Gaddis 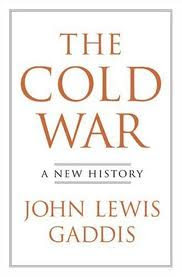 I listened to this one and I think I need to listen to it twice. I found it extremely engaging, but it's not your typical "narrative" history. He organizes his materials more or less chronologically, but focuses on idea and concepts and people more than chronology. Most fascinating was the chapter called "Actors" which he means both literally and figuratively, i.e., the world personalities involved whom he saw as capable actors on the world stage, with a clearly articulated and easily understandable message about the rivalry that dominated the last half of the 20th century. And of course he notes that there was a professional among them, (i.e., Reagan). This is a very conservative view of the world--not my usual fare, but a very interesting thesis nonetheless. The actors were Reagan, Thatcher, Deng Xiaoping, Lech Walęsa, Pope John Paul II ( whom he refers to as Karol Wojtyla throughout) Vąclav Havel, "even Boris Yeltsin" (whom Gaddis doesn't exactly like) who cut through policies and procedures and spoke directly to the people about change. But not Mikhail Gorbachev (my own hero) who did so much to change the USSR but had no vision of what would replace it.
Interesting that those of us who hated Reagan and Thatcher focus on domestic affairs mostly. Both seemed to me way too simplistic in foreign affairs, but that's what Gaddis liked, that they HAD a vision and spoke it clearly so that everyone--the people--at home and abroad could hear it: as in."Mr. Gorbachev, tear down this wall!". Still he had a fit tribute to Gorbie, "And so, in the end, he gave up an ideology, an empire and his own country, in preference to using force. He chose love over fear, violating Machiavelli's advice for princes and thereby ensuring that he ceased to be one. It made little sense in traditional geopolitical terms. But it did make him the most deserving recipient of the Novel Peace Prize."  I suspect there's more cynicism in that statement which I tend to take seriously.
You'll see from that quote, too, that Gaddis is an excellent writer and stylist.
I give it 8/10. If I were more of a conservative, I think I'd give it a 10

All Clear by Connie Willis 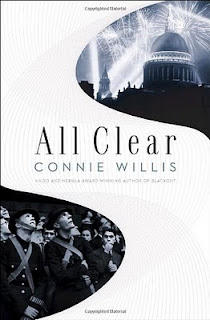 This book is the rest of what Willis calls a Double Decker novel. Blackout was the first part. This one continues the story. There's a forward by Willis (to the audio version at least) that tells you to go back to Blackout if you haven't already read it/listened to it. But I don't see the sense in publishing them separately. As a serialized magazine novel, maybe, with All Clear having 2 or 3 parts itself, but with the intention that it would eventually be published as one novel. All this format is likely to do is irritate readers who expect each volume to have individual integrity.

That said, I read it because I am fascinated both by the idea of time travel and by London during the Blitz, so I couldn't not read this one, but I probably wouldn't recommend it to someone who didn't have one or the other peculiar interest. Willis used the Mass Observation Project documents to get the details right--and my guess is she amassed so many details that she didn't discipline herself to select those likely to make a tightly organized novel. Mass Observation was a sociological study in Britain, starting in the 30ies in which ordinary citizens kept diaries of their everyday life. I think they were paid to do so--probably compelling in the 30ies. I'm not sure there was a clearcut objective, but the result was a huge mass of material and it continued through the war. Only now are sociologists and historians and writers of fiction mining the documents--which are archived at Sussex University as I remember. (More info: http://www.massobs.org.uk/index.htm)
Willis also interviewed a number of older women who had had "war work" in WWII and who had a reunion at the Imperial War Museum in 1995. Quite fortuitously, Willis was there to doing research for the novel. She uses the  reunion as an event in the novel.
So the book is fascinating because of the detail of life during the Blitz. The main action takes place between September 1940 and Spring 1941, though it begins with Dunkirk and there is some action during the V1 and V2 rocket attacks and on VE Day in May of 1945. The basic plot focuses on 3 "historians", i.e. time travelers from 2060 who go back in time to study history from the front lines.  But they are unexpectedly trapped in the past when their "drops" (locations where they go to be "beamed up" as it were) unexpectedly and mysteriously close. They speculate that they've done something to change history--a no no in time travel speculation--and as a result their ability to travel in time is shut down, whether temporarily or permanently they don't know. They fear what they've done has changed the outcome of the war. They fear that the Oxford of 2060 (home to them) has been destroyed.
The plot if VERY convoluted and there's lots of sentimentality and lots of stock characters and melodramatic situations, but it's compelling enough to finish just to know what happens, though the title clearly gives you a clue. I could never recommend this as great literature. Probably those fascinated by London during the Blitz will like this better than science fiction types who love time travel. Willis never claims to construct a viable theory of time travel, but she doesn't even resolve all the questions and contradictions her "theory" raises.

Freedom Summer: The Savage Season That Made Mississippi Burn and Made America a Democracy by Bruce Watson 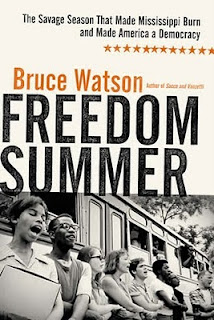 I remember the summer of 1964 very well--I watched most of it on the TV evening news where I gathered with fellow Peace Corps trainees in the evenings at Indiana University (and for two weeks at Indiana State in Terra Haute). We had classes all day: history of Africa and Sierra Leone, public health lectures, phys ed, Krio language, etc. etc. It was really like going to summer school except that we all lived together in Quonset huts left over from WWII and stuck together because we never had a free minute from 7 in the morning till 9 or 10 at night.
Before 1964, I had never been particularly tuned in to Civil Rights. I don't even remember hearing about the murder of Emmit Till until many years later, but 1964 was the summer when SNCC volunteers--mostly college students from the north--went to Mississippi to run "Freedom Schools" and help the blacks register to vote (often having to convince them first that they deserved to take the same role as the whites in a democracy). And it was the summer when 3 Civil Rights workers were murdered by a bunch (18-19) of racists and KKK members who got a backhoe and buried them under a dam being built. It took all summer for the FBI to find informants who eventually led them to the bodies. It was the summer when the country was really shocked to discover that white Mississippi would stoop to beatings and murder to "preserve their way of life", i.e., to keep blacks in their "place". It was also the summer where the Freedom Democrats tried (unsuccessfully) to get seated at the Democratic convention to supplement or replace the illegally chosen white Democrats.
And I felt twinges of guilt all summer. I was going to Africa to help blacks--and not going to Mississippi--because I wanted to see the world, other cultures, etc. When at the airport in NY a man laughed at us and said, "IF you want to help blacks, I can just take you to Harlem and you can work there. You don't have to go to Africa", I felt another twinge. I was tuned into JFK's "Ask Not" message, but from the first tuned into the Peace Corps as the chance of a lifetime to see the world no one else saw (in those days, ordinary people who went abroad went to Europe and that's about all).
Bruce Watson's book is a worthwhile read, especially for those who don't know much about the Civil Rights movement and about this experiment by America's young liberals. It will be an eye opener. Although Watson slides into some "purplish prose" every once in awhile--which I didn't mind because I shared his views--this is an excellent history of Freedom Summer. As well as profiling the leaders and providing an excellent overview of Mississippi history since the Civil War, it focuses on four of the volunteers--who they were, why they joined, what happened to them in Mississippi--even where they are now.
The murder of Chaney, Goodwin and Schwerner is a story that's told piece by piece since, though the murder happened on the first day of Freedom Summer--June 21st--it reverberated through the whole period as the mystery of their disappearance was gradually unraveled in all its sordidness. And in the end, Mississippi refused to prosecute anyone and the only trial was when the Federal government brought suit for Civil Rights violations, which the defendants laughed at. And while that murder was undoubtedly the worst thing that happened during Freedom Summer, it was certainly not the only violence. Watson even tells the story of an insurance agent who defended the the work of Freedom Summer and, as a result, his business was ruined, his family harassed and they were eventually forced to move out of the state. Violence was meted out to blacks who dared to want to register as well as to the "uppity Northerners, Jews and Communists" who presumed to challenge Mississippi ways and help them. And if you wonder "why Mississippi?" more than any other southern state, Watson tackles that question too.
The final chapters of the book focus on the impact of Freedom Summer, particularly on the heart-breaking defeat at the Democratic Convention. A mealy-mouth compromise was reached--and Humbert Humphrey cried too when he proposed it. Lyndon Johnson knew he couldn't seat the Freedom Democrats without taking the very great risk that Goldwater would be elected when the entire Southern delegation left the Democrats as they threatened. He tasked Humphrey with seeing that the delegation wasn't seated. Politics trumped conscience on that one. But Watson also chronicles how Mississippi changed--and changed relatively quickly--after the Voting Rights Act of 1965 and after the awful publicity from Freedom Summer (business and tourism were affected seriously). Many citizens who had been afraid to speak out when the voices of hate ruled began to make themselves heard. Mississippi, with a majority of black citizens, began to let blacks register and win some elections....
Not all of the blowback from Freedom Summer was benign. SNCC became increasingly divided over the issue of nonviolence. Stokley Carmichael and others moved to "black power" and discouraged the participation of whites in Civil Rights issues. Violence broke out in Northern cities, proving that racist and bigotry were not exclusively Southern phenomena.