The Black Swan: The Impact of the Highly Improbable by Nassim Nicholas Taleb

I highly recommend this book, though mine is a probably a very superficial review. I'm not highly knowledgeable about statistics or models, though I've had my experiences and have always been suspicious of predictions based on them. And of course I recognize that the "really big things" seem to come out of the blue. 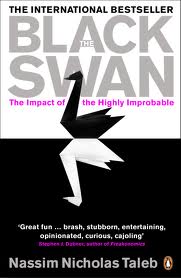 The main idea is relatively simple, that when we consider the universe of possibilities, we tend to focus on models and statistics that define the limits of the possible and to ignore the outliers. His initial example was from the point of view of the pig, which every morning for 1000 days, got a big breakfast and was left to wallow, and so defined reality in terms of its experience--until suddenly one morning it's slaughtered for bacon. He likens the pig's surprise with our surprise at the stock market crash of 1986 or 911. (The book was written before the current financial crisis and before the Japanese earthquake/tsunami.) And he talks about the danger of discounting those events that lie outside of our mathematical models and normal ways of planning for the future.
Amazon's description of the book is better than mine: "A black swan is an event, positive or negative, that is deemed improbable yet causes massive consequences."
I like it because I can't help but notice that everyone who predicts the future (including me) is wrong--maybe not completely wrong but they usually miss the really big things--and yet we don't really consider the range of what might happen, only what seems likely to happen. We tend to be like the pig who was totally blindsided by his ultimate fate. The discussion of how to build nuclear plants in the wake of Fukishima seems a case in point. In any one location, it's not all that hard to consider a range of possible events to protect against, but protecting against the really big event? In the wake of current tornadoes, I hear planning to prevent future damage as if it really were possible to contain the tornado (or other weather) danger. Clearly what we usually do, is plan for a range of possibilities and assign the others to the realm of the nearly impossible. Taleb is arguing that we do ourself a huge disservice by discounting the outlying possibilities.
Taleb himself is definitely present in the book which one doesn't expect. We learn a lot about him personally and his origins in a small village in Lebanon. His jokes are not always funny. You sometimes feel embarrassed by his combination of arrogance and transparency. But he didn't totally turn me off because I think he's made a career of not fitting in because he's attuned to truths that others don't even consider. He's particularly hard on the financial world. 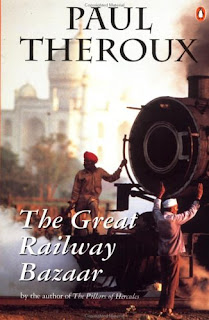 F
First of all it's old and it takes some adjustment to get back into the mindset of 1975. When Theroux traveled to the war wasn't over (he was horrified to discover entrepreneurs setting up battlefield tours) and when he went from the Soviet Far East to , it was still the . In fact, that last part of the trip, when he traveled from northern to the in the winter, was the worst part of the book and not only because it was an old story politically. Theroux was also tired of the trip and irritable.  I began to wonder (because I think he did) why he'd planned this trip. I'd also recently read Ian Frazier's excellent Travels in Siberia which gave me far more insights into this area than did Theroux who never even got off the train. Of course he'd not have been free to travel in in the 1970ies as Frazier was in the early 2000s. Still he came off as sick of the trip and not in the least interested in where he was. No associations at all with places and Russian history, for example, not even Yekaterinburg where the Tsar died.
The book seems to have been written as he went because he arrived in with six notebooks full of text. It does read as if he was writing “in the moment”. The journey—and the book—begins at Waterloo Station in London and he began talking about what he was seeing and the people he was traveling with right then—to underline the fact that English travelers were as odd and noteworthy as the Malays or Burmese. He traveled to and then to on what was left of the Oriental Express (not very luxurious at that time). The idea was to travel the great trains of Asia and of those he found the Indian trains the most comfortable for travel—clean sheets and good food. Frankly, I became a little bored with the details of the accommodations. I suppose I was more interested in the destinations while Theroux’s fascination was with the journey itself.
While I share Theroux's fascination with trains which he attributes to growing up near the tracks of a major train in Massachusetts (my fascination came from the train that passed right near my grandparents in Duluth—zillions of hoppers full of red iron ore and engineers who always waved at me), I don't really like books that are primarily train journeys where the writer just passes through and notes all the exotic stuff. I didn't much like The Old Patagonian Express either--in both cases because I wanted to know more than the odd tidbits. I also read Dark Star Safari (more of less the route of the Cape to railway that was the dream of Cecil Rhodes). The through railway didn't actually exist so he spent more time in the countries and he went back to where he's been a Peace Corps volunteer years before.
In short I don't know why I keep reading Theroux because he's not a favorite. I guess it's the places that interest me and I never get enough because when he arrives he’s soon off on the next train.