The Forgotten Highlander: My Incredible Story Of Survival During The War In The Far East by Alistair Urquhart

I read this book for two reasons. I'd been reading another book about prisons in WWII (Ravensbruck) and I was curious about the background for Richard Flanagan's THE NARROW ROAD TO THE DEEP NORTH which is one of the best novels I've read recently and the main character of which was an Australian Army doctor who was in a prison camp building the railroad in Thailand. I wanted to read a memoir of someone who'd actually been there. 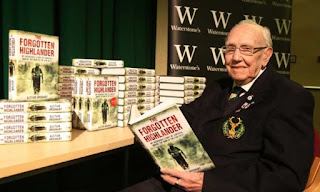 This was an excellent memoir, written by a hear 90-year-old who'd not talked about the war much since he returned home to Aberdeen in late 1945 after six years serving with the Gordon regiment, 3 and a half years of which he'd spent in Japanese prisons. He was imprisoned first in Singapore in 1942, and then was transported in a railroad car packed with fellow prisoners to Thailand and then marched through the jungle for days to work on the railroad. Many died in the railroad cars but the march through the jungle was indeed a "death march". The prisoners had to build their own huts. They never got more than a measure of rice and some water once a day, rice full of weevils and other stuff. Their clothes deteriorated (most tragic was losing his boots) and thereafter they went naked or with loin cloths only. He managed to stay alive to "keeping his head down" as far as possible and concentrating on survival. When he came down the cholera he was evacuated to a prison hospital which was like heaven especially since he met a doctor who helped him recover. Then it was off to the river Kwai to build the bridge, a situation orders of magnitude more dire than in the movie. From there he was evacuated by sea (thousands of men locked in the hold of a ship). The ship was torpedoed (because the Japanese put red crosses on arms shipments but not on hospital or POW ships), and he spent several days alone on the sea (which he barely survived after ingesting salt water and crude oil from a tanker sunk in the encounter too) then to another ship which took him to Japan, a camp near Nagasaki where eventually he was blown down by a whoosh from the atomic bomb and marched out through radio active waste when rescued by American forces.

The details are horrendous and generally understated so doubly believable. An important witness for events we knew had happened but need to remember. Incidentally he mentioned an heroic Australian doctor who may have been the model for Flanagan's character. Not someone he met, but he later found out the Australians went to the railroad building camp after the Brits.